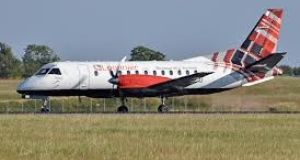 Loganair has launched a new route from City of Derry Airport to Manchester only a day after it announced it was to take over the service from the northwest to London Stansted.

Daily flights between Derry and Manchester will begin on May 24th. The route will be serviced by a 49-seat Embraer 145 jet, with fares starting from £39.99.

Scottish airline Loganair stepped in this week to take over the Derry to London Stansted route after Flybmi, which had previously operated the service, went into administration. Loganair’s twice-daily flights to London will begin on February 27th.

The airline already provides a service between Derry and Glasgow five days per week.

The collapse of Flybmi had led to concerns over the viability of Derry’s airport, but the airport’s chairman Albert Harrison said the confirmation of both routes was “hugely positive news” for the airport and its customers.

“This announcement, on top of the funding confirmation for the London route, is evidence of the huge commitment of our staff to work in collaboration with our partners to maintain frequent, conveniently scheduled air services to cities in the UK.

“We are committed to continue with this work as we recognise the important role the airport plays in the economic development of the northwest city region.

“Our new Manchester route marks a further expansion of the airline’s destination map from Derry, building our relationship with the airport and providing even more choice to customers,” said Loganair’s managing director Jonathan Hinkles. “With a robust economy and diverse cultural offering, we’re excited to connect the two cities.”