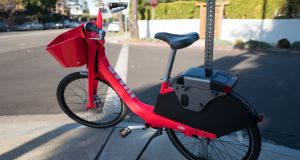 Dublin City Council rejected proposals by US taxi-hailing company Uber to roll out an electronic bike-sharing service in the city amid concerns over safety and the risk of vandalism being carried out by some operators against competitors.

Uber petitioned Dublin City Council late last year for a licence to start offering its Jump Bike service. It planned to put up to 1,000 of the electronically assisted bikes in the capital.

However, official advice issued to council chief executive Owen Keegan before Christmas recommended that e-bikes “be introduced on an incremental basis, and that the council take cognisance of recent international developments such as in the Netherlands, where 57 e-bike riders were killed in 2017, up by 17 on 2016 figures”.

The council official also argued that the appropriate number of bike-sharing schemes for a city the size of Dublin was two, citing concerns around the financial viability of more than two operators, “predatory pricing” and “vandalism of operators bikes”.

Officials also raised concerns about the potential for an over-concentration of bike-sharing schemes – particularly stationless bikes – to frustrate cyclists’ access to secure parking spots in the city.

The council has already granted two licences for stationless bike schemes to operate in the capital – one to Bleeperbike, which is backed by a firm linked to property developer Richard Barrett, and the other to a company called Urbo. Under these plans, 900-1,000 stationless bikes are already approved, with 450 already on the streets.

“I believe it is premature at this stage to invite applications for a third operator for a solely e-bike scheme as this would be contrary to the policy position that allows an increase in bike-share numbers to equal no more than 50 per cent of all the new bicycle parking spaces provided,” a council official said in the policy advisory note.

Uber first wrote to the council about its plans in November and had hoped to roll out the service before the new year. The company argued that users of e-bike schemes made significantly longer journeys than those sharing pedal bikes.

“It is clear to us that e-bikes open up shared cycling to a wider audience and user base than pedal cycles usually reach,” the company said in a letter to Mr Keegan in December.

There remains a chance that Uber may get the green light for its plans, however. According to the documents, “should Urbo not commence operations before next May, it would be our intention at that stage to advertise for applications for the second licence, which would facilitate Ebike and other potential e-bike or pedal bike operations.”

1 Fair Deal nursing homecare leaves little for bills and gifts
2 Portugal set to curb tax breaks for wealthy foreigners
3 Tax and spend: What have FG done for your pocket?
4 Pensions row fix could threaten future of State payment, actuaries warn
5 US budget deficit forecast to blow out by mid-century
6 Accumulated profits at Kathryn Thomas’s media company rise to €420,000
7 Domestic economy to grow by 3.6% but Brexit threat looms
8 Court asked to impose maximum disqualification on director
9 Pound dips as Bank of England decision looms
10 Are there annual limits on inheritances or gifts to a child?
Real news has value SUBSCRIBE