Honda Motor has announced it would shut its sole British plant by 2021. The closure of the Swindon factory is expected to result in 3,500 job losses and marks a big symbolic blow to British manufacturing amid the tumult of Brexit. Video: Reuters 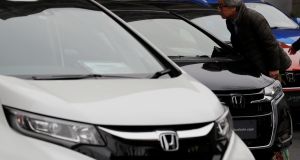 Honda will shut down its plant in Swindon in 2021 in the wake of the uncertainty caused by Brexit, marking what would be its first ever closure of a vehicle factory in its 71-year history.

In a statement on Tuesday, Honda said it would close the factory west of London as part of global restructuring of its manufacturing network to prepare for the age of electric vehicles.

The closure of Honda’s sole manufacturing site in Europe is expected to lead to the loss of 3,500 British jobs and deals a massive blow to the UK’s car industry as the country prepares to leave the EU.

The company also said it would close its factory in Turkey, where it employs 1,100 people and produces about 50,000 cars a year, of which 20 per cent are exported to Europe.

The decision came just two weeks after Honda’s Japanese rival Nissan announced that it would no longer build its X-Trail sport-utility vehicle at its plant in Sunderland, the biggest manufacturing facility in the UK.

But in a statement on Tuesday, Honda did not mention Brexit in announcing its decision to close the Swindon plant.

“This decision is not related to Brexit,” Takahiro Hachigo, Honda’s chief executive, said a news conference in Tokyo.

Justin Tomlinson, the Conservative MP for North Swindon, also said on Monday that the Honda move was not related to the UK’s decision to quit the EU.

Greg Clark, business secretary, said the news was “a devastating decision for Swindon and the UK”.

“This news is a particularly bitter blow to the thousands of skilled and dedicated staff who work at the factory, their families and all of those employed in the supply chain,” Mr Clark said in a statement.

He said he would convene a task force in Swindon with local MPs, civic and business leaders as well as trade union representatives “to ensure that the skills and expertise of the workforce is retained, and these highly valued employees move into new skilled employment”.

The Unite trade union also vowed to campaign to save the Swindon factory and hit out at the government’s handling of Brexit, which it suggested may have contributed to the decision.

“We acknowledge the global challenges that Honda has outlined in its statement, but we don’t accept that this plant, with its highly skilled and dedicated workforce, does not have a viable future,” said Des Quinn, Unite national officer for the automotive sector.

“We will leave no stone unturned to keep this plant going and its workforce in employment. While Brexit is not mentioned by the company as a reason for the announcement, we believe that the uncertainty that the Tory government has created by its inept and rigid handling of the Brexit negotiations lurks in the background.

“If the government had delivered a strong and stable Brexit that protected the economy and jobs, we may well have been in a very different position today.

While other British carmakers such as Jaguar Land Rover have been hit by the fall in demand for diesel motors in the wake of the VW emissions scandal, about 94 per cent of Honda’s output at Swindon is petrol cars.

Analysts say the Swindon closure is long overdue. Honda had been scaling back its struggling UK operation for years and its market share in Europe remains tiny.

“There is no rational business argument to keep the plant in place,” said CLSA analyst Christopher Richter. “The risk of a hard Brexit has finally swept away any lingering position within Honda to closing that plant.”
– Copyright The Financial Times Limited 2019