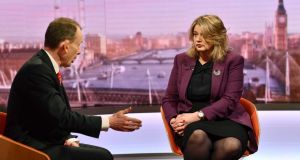 A no-deal Brexit would be “absolutely catastrophic”, a boss at Airbus has said, warning future investment in the UK could be under threat.

The aerospace company announced last week that it would be stopping production of its superjumbo A380 aircraft.

It said it had made the “painful” decision after struggling to sell the world’s largest passenger jet and after Emirates chose to slash its A380 order book by around a quarter.

While the decision was unrelated to Brexit, Katherine Bennett, senior vice president at the company, said the current political landscape is a major worry for business.

Airbus chief executive Tom Enders has previously branded the Government’s handling of EU withdrawal a “disgrace” and said the company could pull out of the UK if Brexit undermines its ability to compete.

Ms Bennett told BBC’s Andrew Marr Show “difficult decisions” will have to be made in the event of no deal.

She said: “What we’re concerned about is the prospect of a no-deal. There is no such thing as a managed no-deal, it is absolutely catastrophic for us and this is why we wanted to speak up.

“Our CEO has felt it important to speak up on behalf of our sector which is a really important contributor to the UK economy. ”

She said they currently have a backlog of 9,000 aircraft to produce, providing plenty of work for UK employees for now, but added: “There will be decisions coming down the line in the next few years where my company will have to look seriously at investments.”

Airbus has spent tens of millions of euro on preparing for a no deal, including stockpiling parts, she said.

Ms Bennett said: “We are preparing for the worst and hoping for the best.”

Rejecting suggestions she is part of so-called Project Fear around Brexit, she said: “We think this is such a monumental thing that businesses have to speak up.” – Press Association