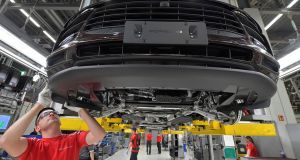 Porsche’s UK unit has told customers they might have to pay as much as 10 per cent more than expected for their imported cars after a hard Brexit and their cars arrive after March 29th, when the country is set to leave the EU.

The move is a “precautionary step” that allows customers “to plan ahead should this situation arise”, Porsche said in an emailed statement.

Customers who placed deposits on or before January 17th will not be affected.

The move by Volkswagen’s most profitable division marks the latest sign that failing to reach a divorce deal between the UK and the EU could affect dealerships, factories and suppliers. Ford warned last week of dire consequences for its UK factories that employ more than 7,000 if politicians fail to avert a no-deal split.

Affected Porsche customers would have the option to “adjust their order accordingly”, Porsche said in the statement. “Like the rest of the industrial sector, we need comprehensive clarity on the shape of future relations between the UK and the EU very quickly.”

Unlike automakers such as Ford, Nissan and Jaguar Land Rover, the German sports car-maker has no manufacturing operations in the UK. The company imports all of its vehicles from EU states. Porsche delivered a record 256,255 cars worldwide last year, up 4 per cent from 2017, fuelled by growth in its largest markets China and the US.

Brexit is a real problem for Porsche because the UK has traditionally been one of its largest markets in Europe. Well-heeled shoppers in London have snapped up its 911 sports cars and the Macan and Cayenne SUV models, which occasionally have been mocked as “Chelsea tractors”.

Porsche’s popular Macan compact SUV, which starts at £46,344 (€52,907) including value added tax, would cost £50,978 (€58,197) if the duty was to be implemented. The surcharge would help Porsche protect earnings if no deal is reached and the UK falls back on World Trade Organisation rules, ending an era of tariff-free transportation of goods within the EU, the world’s largest trade bloc.

“For us the current state means a further period of insecurity and planning uncertainty,” Porsche said in the letter. “In light of the current difficult situation we continue to prepare for all eventualities.”