Daimler and BMW to invest €1bn in potential Uber rival 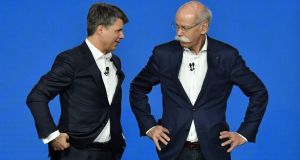 German carmakers Daimler and BMW unveiled a joint ride-hailing, parking and electric car-charging business on Friday to compete with mobility services provided by Uber and other tech firms.

The luxury car firms said they would invest more than €1 billion to expand the joint venture, shifting beyond manufacturing and car sales towards pay-per-minute or pay-per-mile systems.

Consultancy PwC has said carmakers face marginalisation by cash-rich technology firms unless they develop services based on vehicle usage.

Established ride-hailing firms have been expanding. China’s Didi Chuxing aims to build its business in Latin America and Uber is gaining a stranglehold in its US market.

“Further co-operation with other providers, including stakes in start-ups and established players, are also a possible option,” Daimler’s chief executive Dieter Zetsche said.

Daimler’s Car2Go car-sharing brand will be combined with BMW’s Drive Now, Park Now and Charge Now businesses, with both carmakers holding 50 per cent stake in the venture.

The move means that MyTaxi, which counts Daimler as its majority shareholder, will rebrand to Free Now.

The company sent an email to customers saying there would be no change to its service and app and that the new name would come into effect later this year via a standard app update.

It is the second rebrand in three years for the app, which was originally known as Hailo before Daimlier took its 60 per cent stake.

The other businesses in the Daimler-BMW joint venture – Share Now, Reach Now, Park Now and Charge Now – do not currently operate in Ireland.

“These five services will merge ever more closely to form a single mobility service portfolio with an all-electric, self-driving fleet of vehicles that charge and park autonomously,” said BMW chief executive Harald Krüger.

BMW and Daimler are working to develop autonomous cars, vehicles which could enable them to up-end the market for taxi and ride-hailing services. – Reuters.

1 Coronavirus: Construction sector most significant part of new shutdown
2 British exceptionalism backfires in style as Johnson tests positive for coronavirus
3 Volkswagen burning through €2bn in cash per week
4 Wetherspoon’s panto-villain chairman may have the last laugh
5 Can husband keep savings and half the house in divorce?
6 UK needs to be honest about its Covid-19 strategy
7 Rivian takes on Tesla with big batteries and subtler approach
8 Denis O’Brien’s Digicel asks creditors to write off some of its $6.8bn debt
9 Will Covid-19 force Primark to rethink decision not to sell online?
10 How the viral app Houseparty is entertaining a generation in lockdown
Real news has value SUBSCRIBE