Dublin’s reputation better than that of Madrid, San Francisco and New York 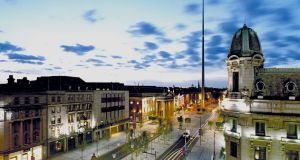 According to Reptrak, Dublin’s reputation improved across all measurements compared to 2017. Photograph: Donal Murphy

Dublin’s reputation is stronger than those of Madrid, San Francisco and New York, a new study shows.

City Reptrak, which rates cites where people would like to work, live, visit or do business, ranks the Irish capital at number 17 in the world, the highest position it has achieved since the survey began seven years ago.

Dublin moved up three places in the rankings this year from 20th position in 2017, putting it ahead of Spanish capital Madrid, and New York and San Francisco in the US.

However, it lagged other European centres, such as Vienna at number three, London at number six and Amsterdam at number 11 and Edinburgh at number 15.

Sydney, Australia topped the survey for the third year in a row with a score of 82.29, compared with Dublin’s 77.57.

The survey measures a city’s reputation according to factors such as its business environment, social and economic policies and whether it has well-developed institutions.

According to Reptrak, Dublin’s reputation improved across all measurements and it scored highly on some key attributes including “is a beautiful city” (82.47) and “offers a wide range of appealing experiences” (80).

“Nevertheless, there is probably still room for improvement as our capital city only ranks in 24th place in under ’invest in’,” he said.