Jameson Distillery soaks up the visitors after €11m refurbishment 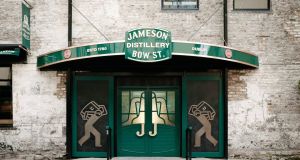 The visitor centre in Smithfield, which is on the site of the original Jameson distillery that operated from 1780 to 1971, reopened last March after closing down for seven months to undergo an €11 million refurbishment.

More than 4 million people visited the premises between 1997 and mid-2016.

Californian-based BRC Imagination Arts led the redevelopment, having previously worked on a number of tourist-related projects, including the Guinness Storehouse, the Heineken Experience in Amsterdam, and the World of Coca-Cola Museum in Atlanta.

“As is evidenced by the incredibly strong visitor figures recorded over the past year, the new-look Jameson brand home has fast become the must-visit whiskey destination in the world,” said Claire Tolan, managing director of the centre.

Jameson is ranked as the world’s fastest-growing Irish whiskey, with 28 years of consecutive growth and sales of 6.5 million cases in 2017. The whiskey is exported to over 130 markets, with more than half of these experiencing double- or triple-digit growth.

1 Oxford Covid vaccine trials offer hope for elderly
2 Sustainable investment: How your pension can help tackle climate change
3 Hurrah for the companies giving staff more time off
4 How much state pension will I get next year?
5 Ulster Bank to introduce new card payment controls on app
6 RTÉ to seek 70 voluntary redundancies as ‘large costs’ beckon in 2021
7 Apple planning updates to its AirPods earbuds next year
8 Start-up Loanitt raises €570,000 as it looks to double headcount
9 Some Irish money market funds came close to danger in March
10 Aryzta to pursue asset sales as takeover talks fail
Real news has value SUBSCRIBE