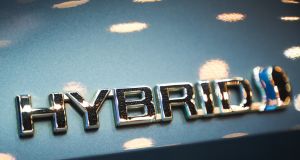 Hybrids have proved to be the biggest hit with Irish new car buyers, up 70 per cent on last year to 5,674

According to new figures from the Central Statistics Office (CSO), 33,928 new cars were taxed for the first time during the first two months of 2020, a drop of 6.9 per cent on the same period last year. There was also a significant drop in the total used cars imported so far this year, down 12.1 per cent at 19,391.

The fall in used car imports follows the introduction of a tax on new and used cars based on their Nitrogen Oxide (NOx) emissions, which particularly hits older used imports.

Hybrids have proved to be the biggest hit with Irish new car buyers, up 70 per cent on last year to 5,674. They remain well ahead of full-electric cars, which were up 3 per cent on the same two months of last year at 1,018. However, diesel remains the most popular choice, even though it is down 19 per cent at 14,327, while the number of new petrol cars also fell, by 11 per cent to 12,909.