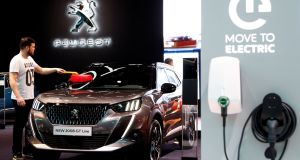 Peugeot owner PSA and BMW are in the lead in the race to cut car emissions in Europe, pulling ahead of Volkswagen.

Only two months into the new CO2 regime, the early winners and losers are already becoming clear.

PSA, one of the most electric-shy carmakers, is already compliant with new EU rules launched in January, the company said this week.

BMW, an early leader that was slow to follow the success of the i3 with fresh battery models, is also ahead of the EU targets, it announced.

At the back of the pack, German rival Daimler – makers of Mercedes-Benz vehicles – is lagging behind targets, while Volkswagen, which has put electric cars at front and centre of its strategy, is banking on a steep rise in electric sales this year to clear the bar to meet the rules.

The targets come at a time of squeezed sales in major markets, threatening to undermine profitability by forcing carmakers to sell battery models that book little or no profit.

On top of this, coronavirus, which forced the cancellation of this week’s Geneva Motor Show, has put a virtual halt to trading in China, the industry’s largest market.

The CO2 rules force carmakers to lower average emissions in their vehicles sold in Europe to 95 grammes of CO2 per km, or face fines that could run into billions of euros.

Each manufacturer has its own CO2 target, based on the weight of vehicles.

A business selling smaller cars such as PSA, therefore, has a lower CO2 target than a company with a heavier average vehicle, such as Mercedes-Benz owner Daimler. The targets for each company vary from about 91g/km to just over 100g/km.

In preparations for the rules, which were phased in at the start of January, manufacturers have revamped electric sales strategies and tried to eke efficiencies out of their existing petrol and diesel engines.

“We have been CO2 compliant from day one,” said Maxime Picat, head of Europe at PSA, which owns the Peugeot, Citroën, Vauxhall and Opel brands.

He said the company aims to meet the rules month by month, giving it more breathing space in case sales of some models fall off. PSA beat its individual target of 93g/km in January and February.

BMW, which was an early electric pioneer with the i3 car, is below its own target of 104g, chief executive Oliver Zipse said. He added the soon-to-be released Mini Electric had received 7,000 pre-orders.

Both companies have released some pure electric models, but pinned their hopes on a flexible manufacturing system that allows them to offer hybrid or electric versions of current models.

Up to a fifth of PSA customers who bought a car in January and February offering a hybrid or battery version chose the cleaner option.

“We think it’s mandatory to be a global player to have flexible platforms that can provide combustion engines, whether diesel or gas, as well as plug-in hybrid or electric cars,” he added.

Electric and hybrid sales at the German carmaker were 40 per cent higher in January and February than the same period a year earlier, he said, accounting for one in 10 models.

The company has also managed to keep below its emission target, despite sticking with its high-performance M-badged models, which have high emissions but are extremely profitable, in its vehicle range.

Their flexible approach is in stark contrast to VW, which will build its own dedicated electric models from the ground up using a skateboard or chassis system to improve their efficiency. Its self-imposed target for the whole group, which includes brands ranging from Seat to Porsche, is 99g.

While the company plans to flood the market with its new battery-powered ID3 car towards the end of the year, the vehicle’s release has been plagued by troubles over its software, VW’s chief executive Herbert Diess told the FT last week.

The company’s Audi brand, which saw production of its e-Tron SUV stall because of battery supply issues, is facing another hurdle.

“We have to take the hassle away, from installing charging solutions at home or offering a charging card, offering the total ecosystem,” said Hildegard Wortmann, Audi’s board member for sales, and the brain behind the company’s marketing campaign for electric vehicles.

“There is a lot of communication needed to get somebody to that stage where they have a full understanding that you never drive that much that you need to have range anxiety.”

The reality is that sales of electric cars, which remain below 5 per cent of sales in almost all European markets, are only that high because of government subsidies.

In part, the companies are helped by rules that ease manufacturers into the new regime. This year, the most polluting 5 per cent of vehicles are not included in the calculations, while electric cars gain “supercredits” that allow them to count double toward targets.

The value of the credits drop next year and the year after, while from 2021 all car sales are included in the mix.

Daimler, which last month reported its worst performance in a decade, unveiled three new short-range plug-in hybrids this week, which can manage roughly 70km on a single charge.

“This should cover more or less most of the trips that people take on a daily commute basis,” said chief executive Ola Källenius. The group requires a huge cut to its emissions, which last year were a fleet-wide average 138g, to reach its target of just above 100g.

“It’s part of a very steep ramp up of electrification of Mercedes this year,” Mr Källenius added, noting that the carmaker would quadruple the number of electric cars and plug-in hybrids it sold this year, and produce 50,000 of its flagship electric car, the EQC, in China and Germany in 2020.

But he admitted compliance in 2020 and 2021 will be a “particular challenge” for Daimler. “I think we were within striking range.” – Copyright The Financial Times Limited 2020