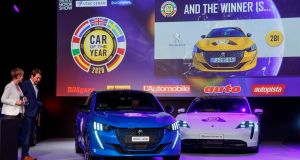 The French supermini, which comes in petrol, diesel and fully electric variants, secured 281 points, ahead of the Tesla Model 3 on 242, Porsche Taycan on 222 and Renault Clio on 211. The Ford Puma followed with 209, ahead of 152 for the Toyota Corolla and 133 for the BMW 1 Series.

The motoring equivalent of the Oscars, the award is now entering its 57th year and is judged by a panel of 60 motoring journalists from across Europe, who this year made their call on a list of over 30 new models arriving on the market this year. Each jury member has 25 points to award, with a maximum of 10 points to any single finalist.

The Geneva motor show may have fallen foul of the coronavirus but the Car of the Year award event was held at the Swiss venue, albeit without an audience.

Unlike some other awards, Europe’s Car of the Year is independent of the car manufacturers and demands no entry fee from them.

And it’s also a public affair where not only are the jury members’ scores for each car public but their opinions on each are also published on the award’s website at caroftheyear.org

The winning votes were announced country by country, with the French car brand securing the top points from four of the 23 countries, and a joint tie with Porsche in Switzerland. However, it scored well across most nations to see off the challenge of the Tesla and Porsche.

Speaking on a video feed, Peugeot brand chief executive Jean-Philippe Imparato said: “This trophy underlines the excellence of the work and great commitment of all the teams of the Brand and the Groupe PSA.” He highlighted the fact the new 208 is offered in petrol, diesel and full-electric as an important strength for the new model range and for its success in the awards.

“We love cars, and we recognise the Car of the Year jury is made up of experts, so we are honoured to win,” Mr Imperato said. “It’s a big surprise and a big pleasure for us.”