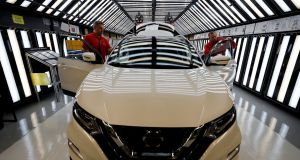 Nissan is investing £400 million (€462 million) in its Sunderland car plant in preparation to build future models at the site, despite the company’s warnings that tariffs after Brexit will endanger the facility’s exports.

On Friday the Japanese carmaker unveiled a new £52m press line, which it has installed ahead of building a new version of the Qashqai, the family sport utility vehicle that accounts for two-thirds of the site’s output.

Despite pledging in late 2016 to make the next Qashqai model in the UK, the company has never before detailed its investments in the site for the new model, which is expected to begin production around the end of this year.

The majority of the £400m investment, which is supported by an £11m government grant, has already been spent, people familiar with the situation say. Installation of the press line began 18 months ago, the company said on Friday.

The spending comes despite Nissan repeatedly warning tariffs with Europe will “jeopardise” the business model that involves exporting 70 per cent of the vehicles made at the site to the EU.

Britain is negotiating a free trade deal with Europe, but may leave the bloc at the end of 2020 without a trading agreement, leading to tariffs and border checks, if negotiations fail.

The FT reported this year that one post-Brexit scenario previously drawn up by Nissan includes plans to stop selling cars to Europe and focus on growing its UK sales in order to support the continued existence of the plant, which is one of the company’s international crown jewels.

Nissan’s investment confirmation is a boon for the struggling UK car industry, which has suffered a steep fall in spending and a spate of plant closures in the years since the vote to leave the EU took place in 2016.

Ford has closed its Bridgend engine facility and Honda announced the closure of its Swindon site, while Nissan has axed plans for another future model - the X-Trail - from the Sunderland facility.

New car production in the UK last year fell to the lowest level in almost a decade, falling 14 per cent to 1.3m.

Spending on new projects in the sector has fallen to £1.1bn last year, compared with an average yearly spend of £2.75bn, according to figures from the Society of Motor Manufacturers and Traders.

Nissan invested £100m last year to begin producing the new Juke model, a smaller car, at the site and has pledged to spend £1bn over five years at the plant. – Copyright The Financial Times Limited 2020