Lufthansa cuts capacity equivalent to 150 planes due to coronavirus

Airline bosses have warned worst yet to come for industry 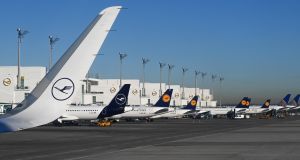 Lufthansa had already said on Friday it would reduce the number of short- and medium-haul flights by up to 25 per cent in the coming weeks. Photograph: AFP via Getty

Lufthansa has cut its flight capacity in a move equivalent to grounding almost a fifth of its fleet, it said on Wednesday, confirming what company sources told Reuters earlier about the German airline’s response to the coronavirus epidemic.

“We are dynamically adjusting our plans to reflect extraordinary circumstances,” a Lufthansa spokesman said.

The company said the move was equivalent to grounding 150 aircraft, with around sixth of the capacity cuts related to long-haul flights.

Lufthansa Group, which includes Swiss, Brussels and Austrian Airlines, has a total fleet of 770 aircraft.

European airline bosses warned on Tuesday the worst is still to come for the airline industry in terms of economic damage from the coronavirus outbreak, but also predicted travel demand could stabilise in the coming weeks.

Lufthansa had already said on Friday it would reduce the number of short- and medium-haul flights by up to 25 per cent in the coming weeks depending on how coronavirus spreads.

On Monday, it said it was extending the suspension of flights to China until April 24th, to Tehran until April 30th and reducing services to northern Italy due to the coronavirus outbreak there.

Lufthansa has said it was too early to assess the impact on its earnings, which are due to be published on March 19th. – Reuters