A Corolla that’s pretty and fun to drive? We’re gobsmacked 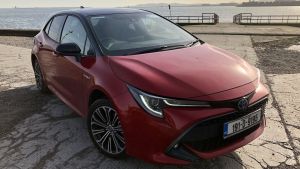 The Toyota Corolla may be the world’s best-selling car, but it has also been several shades of bland. There were the wonderful twin cam versions favoured by the diff-lock wheel spinners, and a few iterations in the 1970s that were actually quite sporty, but in the main the Corolla has been motoring porridge. It filled the gap with little fanfare or excitement.

Well, prepare to be gobsmacked. Toyota has come up with a Corolla that’s actually pretty and pretty decent to drive. What’s more, it’s caught the motoring zeitgeist, singing from the hybrid hymn sheet at a time when everyone seems eager to join the choir. “Diesel is dead” was the message of Toyota’s recent ad campaign, and it plans for the new Corolla to bury the corpse.

Of course Toyota has been banging the hybrid drum for decades now – even when it was thought they were seriously out of tune – but there’s more to its message this time as the Corolla is actually an eye-catching car boasting a surprisingly smart cabin. Both of those comments are judged not against the rest of the market but rather what went before from Toyota in the family hatchback market.

Earlier generations of the Corolla were workmanlike at best, while the ill-fated attempt to revamp the image by rebranding its mid-range family hatch entry in Europe as the Auris was little more than a massive marketing folly that wasted millions of euros. The Corolla moniker adorns the bootlids of the best-selling car in the world. It needed more exciting engineering, not a new name.

Common sense – a rare trait in the car world – has prevailed and the right adjustments have been made this time round. And that sense is due largely to the leadership of Akio Toyoda, the grandson of the founder, who took back the wheel when the car giant faced global scorn over recalls and a fleet of bland product offerings. His predecessors were bottom-line bean counters, who managed to kill off anything that even resembled motoring fun. Toyoda, by reputation and track record to date, is a car guy.

Toyoda ordered that passion be a standard fit on all new cars. Bland is banned. Clearly he can’t have his way with every element of every car, but consider what he’s achieved to date. Toyotas are now a common sight at racetracks again. They’ve won Le Mans (with public acclaim and with hybrids). The fleet now boasts models such as the stunning Lexus LC coupe, the Toyota GT86 and C-HR crossover, the Toyota GRMN range of performance variants and, most recently, the unveiling of a new Supra.

However, to deliver an interesting, impressive Corolla, now that’s a major feat. We bow to you, Akio.

Out go hard, cheap, plastic switches in favour of softer-touch or better-quality materials

So what’s so impressive about the new Corolla? Well, for a start the exterior styling more closely resembles good-looking rivals such as the Mazda 3. It’s an evolution on the Auris, but one that brings the look into better balance. While there’s no defining style to the generations of Corolla, unlike the VW Golf or Ford Focus, there is the start of a firm foundation here.

Inside, there’s a vast improvement in terms of cabin materials and styling. Up front, it pulls off that trick of seeming larger and more airy than it actually is, thanks to some smart design tricks on the dash. Out go hard, cheap, plastic switches in favour of softer-touch or better-quality materials. Toyota showed in the C-HR that it knew how to build quality interiors and, while the Corolla isn’t as smart as that, it’s a world apart from the previous generations.

Space is an issue, however, and the car is squatter to the ground than rivals such as the Focus or Golf, which adds to the sense in the rear that things are a little cramped. Bootspace, at 361 litres on the hatchback, is not enormous either, even though the hybrid battery is stored under the rear seat to retain room in the boot. If you want more legroom and bootspace, opt for the saloon version.

Toyota has done a decent job at soundproofing the cabin, but wind noise is evident on motorway runs

Powering the new Corolla is a 1.2-litre 112bhp petrol or a 1.8-litre 122bhp petrol-electric hybrid or a 2-litre 180bhp hybrid. Our test car was the 1.8-litre mated to the six-speed auto transmission.

The negatives were an official 0-100km/h time of 10.9 seconds; that seems about right, to judge by our test car. It means this 1.8-litre Corolla hybrid is no twin-cam rival. As with all hybrids, the contrast between the quiet whisper below 2,500rpm and the encroaching engine noise into the cabin at higher revs takes a little getting used to for converts from petrol or diesel cars. Toyota has done a decent job at soundproofing the cabin, but wind noise is evident on motorway runs, while there is engine whine when you kick down heavy on the throttle.

And on a run of over 250km – over half in city driving and the rest on a mix of national road and motorway – the average fuel economy figure, according to the test car, came in at 6.7 l/100km (42.2 mpg). This was despite scoring relatively well on the car’s “eco drive” rating system, which awarded me a score of 74, though I’m not sure if that’s out of 100 or 1,000. Regardless, even after calling on full electric mode every time I dropped below 40km/h or so, I struggle to see how I could have hit the heady eco heights of using just 3.6 litres of petrol every 100kms. I also think Toyota needs to make more of its fuel economy stats. While there is a screen display that shows recent trips, there is no chance to drill down on your fuel economy figures in more detail. Given that you are buying a hybrid, one would presume you were particularly conscious of fuel consumption.

As for the ride, it’s remarkably pliant and, even in the Luna Sport grade with 17-inch alloys, it never felt choppy. The steering is much better than we’ve experienced in Corollas in the past as well. Sitting on the company’s new mid-sized global platform, it benefits from double-wishbone rear suspension that, combined with being 10mm lower to the ground, makes it very stable and composed in the corners, yet well able to soak up the bumps and potholes of Irish roads. In fact, it’s the most dynamic Toyota hatchback we can recall, and it’s actually fun to drive. The days when the Ford Focus and VW Golf seemed to have an unassailable lead in handling fun are over; this car shows Asian brands have caught up.

Then there’s the safety tech. The Corolla comes with Toyota’s Safety Sense system as standard across the range. That means active features like road sign assist that notifies drivers of road signs along the way, adaptive cruise control, automatic high-beam lights, and land departure alert with steering assist and lane tracing assist, a new feature that keeps the vehicle centred in its lane at all times.

Also in the system is pre-collision assist that alerts drivers to the risk of a collision with other cars, with pedestrians and in daytime with cyclists. And even if the driver doesn’t react in time, the car will autonomously brake when a collision is unavoidable. It’s the sort of standard feature that will both save lives and expensive insurance claims.

It’s competitively priced as well, starting at €26,370, particularly when you consider the high level of standard equipment that includes all that safety tech.

What we have here is a massive leap by Toyota and a car that can hold its own with rivals. The fact that Ford has let its crown slip with the latest Focus will prove a boon to the Japanese brand, but it’s still facing stiff competition from rivals such as Kia and the leader of the hatchback pack, the Volkswagen Golf.

All credit to Akio for putting passion into the Toyota brand.