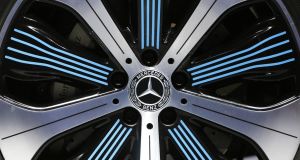 The decline in Mercedes’ sales was led by Europe, where deliveries fell by 11.2 per cent to 57,963 vehicles.

Luxury leader Mercedes-Benz said global deliveries fell 6.7 per cent in January, but with a model offensive in the coming months it continues to project a ninth consecutive record year for sales in 2019.

The Stuttgart-based carmaker said it delivered 180,539 vehicles worldwide last month, its second-best start to a year following a record 2018. The decline comes at a time when all three of its major markets – the US, EU, and China – are struggling.

In Asia, deliveries fell 1.3 per cent, but in China – Mercedes’ biggest market - deliveries rose 4.8 per cent to 71,697, giving it the best-ever start to a year despite the market overall slowing.

Board member Britta Seeger said the B-class volume car, the subcompact CLA and the GLE sport utility vehicle are each being revamped this year, which should give sales momentum in the second half of the year.

“2019 will be a challenging year for the entire industry,” she said, adding that nevertheless “we are hoping to achieve a slight increase in sales and a new record for the full year”.

Shares of Daimler have fallen nearly 50 per cent since a high in March, 2015, as investors worry that the global auto market has reached a peak in the cycle, just as carmakers are forced to increase spending on emissions technology, batteries and better software to compete with new entrants. – Copyright The Financial Times Limited 2019