Drop in volume of goods handled at main Irish ports

Irish ports handled 755,000 passengers in the second quarter, down 0.8% on last year 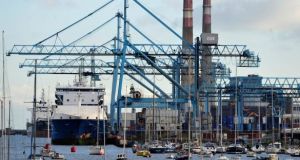 Dublin port accounted for 73.2 per cent of all passenger journeys in the second quarter

Irish ports handled 12.3 million tonnes of goods in the second quarter, down 7.5 per cent versus the 13.4 million tonnes carried in the same period last year.

Goods forwarded from the seven main Irish ports amounted to 4.3 million tonnes, while a total of 8 million goods were received, new figures from the Central Statistics Office show.

The tonnage of goods handled fell in three of the five main categories - liquid bulk, dry bulk and roll-on/roll-off - during the quarter.

Irish ports handled 755,000 passengers in the April to June period, down 0.8 per cent compared with the same period a year ago. Dublin port accounted for 73.2 per cent of all passenger journeys.

The same port accounted for 63.9 per cent of all vessel arrivals in Irish ports during the quarter and for just over half of the total tonnage of goods handled.

The number of vessels arriving in the seven main Irish ports decreased by 3.5 per cent, while the gross tonnage of all arriving vessels fell by 3.3 per cent to 68,503 thousand tonnes.

The UK accounted for 40.3 per cent of the total tonnage of goods handled in the main ports.