Will the ECB’s quantitative easing ever end?

What happens when it runs out of bonds to buy? 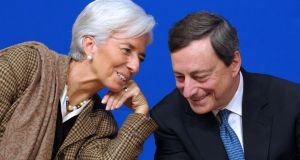 As the European Central Bank limbers up to restart its debt-buying programme, one question looms large for investors: how long can the purchases continue before the bank runs out of bonds to buy?

The ECB is due to start acquiring €20 billion of bonds a month in November, just a few days after this Thursday’s policy meeting – Mario Draghi’s last as president, before handing over to Christine Lagarde. Analysts estimate that the quantitative easing programme can run until the end of next year before bumping up against the central bank’s self-imposed limits, under which it can own no more than a third of any euro zone country’s bond market.

But things could quickly get tricky for Mr Draghi’s successor. If the current downturn intensifies and the central bank wants to increase its stimulus, the thorny question of raising this limit would have to be tackled much sooner.

For investors who have bet heavily on a bond-buying programme that stretches as far as the eye can see, any doubts about the future of QE are uncomfortable.

“This is the fundamental question that will frame the first months of Lagarde’s tenure,” said Richard Barwell, head of macro research at BNP Paribas Asset Management. “Are there quasi-legal constraints that will stop them buying, or is this QE infinity?”

Mr Draghi’s plans, unveiled last month, initially seemed to satisfy stimulus-hungry investors - despite their relatively small size - thanks to an open-ended promise to keep buying until inflation moves back to the central bank’s target.

Since then, however, the summer’s almighty bond rally has gone into reverse amid a growing backlash against the QE package from current and former members of the ECB’s governing council.

In a blow to bond bulls, minutes from the September meeting showed that policymakers did not even discuss raising the 33 per cent limit, citing concerns that to do so would blur the boundary between monetary and fiscal policy.

But after buying €2.6 trillion of debt in its previous QE rounds, the ECB is already close to the 33 per cent threshold in some countries. Gauging exactly how close is complicated. The value of the ECB’s holdings needs to be translated from market value back to its nominal value. Moreover, the total universe of eligible debt is not easy to define, given it contains bonds issued by supranational agencies as well as governments.

Frederik Ducrozet, senior European economist at Pictet Wealth Management, estimates that the ECB is closest to the limit in the Netherlands and Germany, where it owns 31 per cent and 30 per cent respectively. In Italy and France the equivalent figure is just 21 per cent.

The levels are uneven because of another ECB rule: it has to buy amounts in proportion to each country’s contribution to the ECB’s capital. That means it holds a bigger slice of the pie in less-indebted economies.

In practice, however, the central bank has had to bend this rule since the start of the QE programme in 2015 because some countries, such as Estonia, had almost no bonds to buy, while low-rated Greek debt was not eligible for the programme.

By bending the rules further, or focusing more of its buying on corporate bonds, Mr Ducrozet thinks the current programme could last until the end of 2020.

“But there’s a political limit to how far they can go,” Mr Ducrozet said, noting that if the ECB were to divert purchases elsewhere, it could face accusations it is favouring certain euro zone states over others.

Extra borrowing from Berlin would help ease the bottleneck by creating more Bunds, but few are expecting a meaningful fiscal splurge from Germany. Euro zone governments are projected to issue a net €161 billion of debt in 2020, according to Silvia Dall’Angelo, a senior economist at Hermes Investment Management, meaning the ECB will swallow up all the new bond issuance and more.

Raising the 33 per cent limit, which was designed to prevent the ECB from holding enough of one country’s debt to block a restructuring, could be even more controversial. It would also breathe new life into objections that the ECB is in effect financing profligate governments via the back door with its QE.

For fund managers weighing up whether such objections can be overcome, the change in leadership at the ECB adds an extra layer of complexity.

“If we were operating with another eight years of Draghi, who has nearly always got his way, I think we know how this would play out,” said Mr Barwell. “The complicating factor is it’s not him.”

Even so, Ms Lagarde may be able to pick up where the Italian left off, particularly if the threat of recession helps her convince colleagues that more stimulus is needed.

Recent economic data in the eurozone have made for grim reading while long-term inflation expectations are close to a record low. If the spectre of deflation returns, the ECB would be more inclined to tear up its own rule book, according to Ms Dall’Angelo.

“Remember that at one point everyone thought QE in the euro zone couldn’t happen,” she said. “But the last few years have taught us that if the situation is serious enough, nothing is impossible.” – Copyright The Financial Times Limited 2019