Businesses in North ‘relieved and frustrated’ by Brexit extension 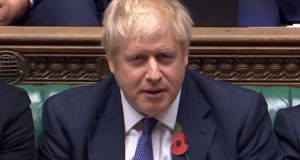 Businesses in the North remain unclear about what Boris Johnson’s Brexit proposals could mean for them in the long run, industry leaders warned.

Businesses in Northern Ireland are “relieved and frustrated in equal measures” about the Brexit “flextension” and remain unclear about exactly what UK prime minister Boris Johnson’s Brexit proposals could mean for them in the long run, industry leaders have warned.

Ann McGregor, chief executive of Northern Ireland Chamber of Commerce and Industry, said the over-riding priority for businesses is that the UK should not crash out of the European Union without a deal and while the extension may signal yet another period of uncertainty for firms in the North. The alternative, leaving without a deal would be a “disaster for business”.

“As frustrating as it will be for many, avoiding a messy departure is critical. A short extension which unlocks complexities and allows for a smooth transition is infinitely preferable to a no-deal exit,” she added.

For manufacturing firms in the North the EU’s decision to grant a Brexit extension to the UK is more than welcome, according to Stephen Kelly, chief executive of industry group Manufacturing NI. He said there would be widespread relief that the flextension would create more time to “scrutinise” Mr Johnson’s proposed Brexit deal.

There has been alarm in the North that the deal could create new customs requirements for firms in Northern Ireland who sell into Great Britain.

Mr Kelly said the finer details of the proposed Brexit deal are still not 100 per cent clear.

“The prime minister’s deal may work politically but it may not work practically and there is an absolute requirement that there is more scrutiny of this deal. This extension gives us the time to scrutinise it and ensure that it protects Northern Ireland’s position in the internal GB market,” Mr Kelly said.

“The business community always wants certainty and while many want to move on we need clarity and there is relief that the extension will give everyone time to reflect on this deal.”

But he said there were also concerns that the delay to Brexit and the continuing uncertainty that surrounds the UK’s planned departure from the EU would result in an “increasing level of job losses” in the North as firms battle to maintain customer confidence levels and secure new orders.

Meanwhile, it is not just businesses that have seen a slump in confidence levels because of the ongoing Brexit crisis, according to a new report on Tuesday from Danske Bank.

Its research shows that consumer confidence generally in Northern Ireland has continued to decline because of both Brexit and the local political stalemate.

Danske Bank’s chief economist Conor Lambe said the ongoing negotiations over the UK’s exit from the EU have had the “largest negative impact” on how people are feeling in the North.

“It’s clear that how the Brexit process develops over the coming days and weeks will have a significant impact on consumer confidence levels during the rest of 2019 and beyond,” he said.