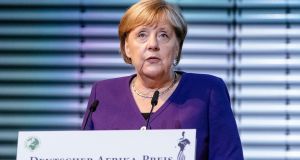 Angela Merkel, German chancellor, last week told EU27 leaders at a summit in Brussels that the European Commission’s plans meant Germany would leapfrog the Netherlands as the biggest per capita contributor to the budget.

Germany is facing a steep 100 per cent increase in its payments to the next EU budget to €33 billion, leading Berlin and a group of four other rich governments to step up their resistance to Brussels’ first draft spending plans after Brexit.

German government estimates show Germany would be hit with a sharp rise in its net EU budget contributions, from €15 billion in 2020 to upwards of €33 billion in 2027 – the last year of the EU’s next long-term budget. The Netherlands would face a rise of 50 per cent, from just under €5 billion to an estimated €7.5 billion net contribution by 2027.

Angela Merkel, German chancellor, last week told EU27 leaders at a summit in Brussels that the European Commission’s plans meant Germany would leapfrog the Netherlands as the biggest per capita contributor to the budget, according to diplomats. As the EU’s largest economy, Germany is already the biggest contributor on a gross basis.

The estimates are based on the commission’s proposal to increase the size of the long-term budget to 1.11 per cent of the EU’s gross national income (GNI) to plug the financial hole left by the UK and boost Europe’s spending firepower on climate and border control. The next budget runs from 2021 to 2027.

The German finance ministry said: “Due to Brexit and the commission’s proposal to abolish the permanent rebate, the financing burden on Germany would disproportionately rise, in comparison to other member states.”

Brussels’ draft plans, which were first revealed last May, have been beset by conflict. Five net contributors – Germany, the Netherlands, Austria, Denmark and Sweden – have demanded a pot no larger than 1 per cent of GNI and are fighting to keep hold of their prized rebates after Brexit.

The calculations will further embolden the so-called “Frugal Five” governments as negotiations enter a crucial period early next year. “When we plan our national budgets we will have to take away billions from healthcare and other national spending. There is no way our parliaments will accept this,” warned one senior EU diplomat.

The commission said it had not yet calculated the rise in net contributions of member states but hit back at the claims of the five rebate countries. Mina Andreeva, commission spokeswoman, said the rebate recipients were “paying a lower share of their income to the EU budget than the other member states, despite being among the top eight EU countries in terms of relative prosperity”.

Brussels calculations show that without the rebates, the five governments would pay an average of 0.91 per cent of GNI over the course of 2021-2027, compared with 0.9 per cent for the other 22 countries.

“Under our proposal everybody will be contributing an equal share of their GNI,” said Ms Andreeva.

The calculations show that France, another net payer, would face a less dramatic increase in its net contributions, rising from about €7.5 billion in 2020 to just over €10 billion at the end of the spending term in 2027. France stands to gain from plans to scrap rebates for the Frugal Five, which cap their annual contributions to prevent “excessive” payments.

Paris is among the countries that foots the bill for these so-called “correction mechanisms”, which were first established by Margaret Thatcher to limit UK farming subsidies to the EU 35 years ago. Ms Merkel has said Germany will not accept any budget deal that does not contain a rebate. At the summit last week, French president Emmanuel Macron warned that 1 per cent could not fulfil the EU’s ambition to act as a “geopolitical” power, according to diplomats familiar with the discussion.

The calculations also show that Poland, which is among the biggest net recipients, will gain additional billions rising from net payments of just under €10 billion a year to €12 billion in 2027.

Entrenched divisions mean EU officials are bracing for a bruising round of negotiations next year once the UK formally leaves the bloc and when EU27 leaders will be confronted with a hard deadline of the end of 2020 to find an agreement.

After a year of stalled talks, positions remain more polarised than ever. Spain and Portugal have demanded a budget size in the range of 1.14 per cent to 1.16 per cent of GNI, while the European Parliament wants 1.3 per cent.

A failure to agree an overall size means the most sensitive negotiations over volume of cohesion payments for eastern Europe or prized farm subsidies have yet to begin. One diplomat predicted a “night of the long knives” late in December 2020 when capitals will be forced to horse-trade and find a consensus.

If an agreement cannot be reached by the end of the year, spending thresholds from 2020 will be rolled over to 2021. In another possible complication, European Parliament officials have warned that MEPs may hold up the final agreement, ensuring that the first year of the new budget retains higher spending for key areas such as cohesion and the common agricultural policy.

“There is little incentive for the parliament to agree on a smaller budget,” warned one official. – Copyright The Financial Times Limited 2019