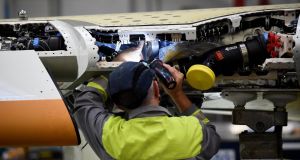 Industry analysts are not ruling out the possibility of global aviation giants Airbus or Boeing making a bid for Bombardier Belfast. Photograph: Getty

A Chinese aviation group which owns a major Northern Ireland manufacturing company has emerged as a potential front runner to buy Bombardier Belfast.

The Aviation Industry Corporation of China (AVIC), which acquired Portadown-headquartered Thompson Aero Seating three years ago and also has a long standing “strategic business relationship” with Bombardier dating back to 2007, is viewed as a “credible contender” for Bombardier by aerospace sector sources.

Thompson Aero Seating, which manufactures premier class and full flat bed seating for major airlines including Aer Lingus, Delta, Singapore Airlines and SWISS, has expanded both its production capabilities and seating range since been acquired by AVIC in 2016.

It is not the only potential Chinese suitor that may be chasing Bombardier Belfast after its Canadian parent this week announced its plans to sell off its entire operations in Northern Ireland, and focus all of its aerospace business in Montréal, in Mexico, and a recently acquired operation in Texas.

Another Chinese state-owned company, Commercial Aircraft Corporation of China (COMAC), might also be a possible bidder.

According to Stephen Kelly, chief executive of industry group Manufacturing NI, which currently counts Bombardier Aerospace as one of its key members, Bombardier’s Northern Ireland operations could be “highly attractive” to Chinese companies.

“This is a world class profitable business in Northern Ireland with a highly skilled workforce. There is no way you can create a highly skilled workforce of 3,500 people, including exceptional engineers, overnight who are capable of producing world class products, and that is a very attractive proposition for any buyer. I believe Bombardier Belfast’s greatest asset is their people – and that’s what’s really going to attract buyers.

“But there is also a significant contracts pipeline in Bombardier Belfast with the work the do for both Bombardier and Airbus and other supply chain opportunities which will help to attract bidders.”

Industry analysts are not ruling out the possibility of global aviation giants Airbus or Boeing making a bid for Bombardier Belfast, particularly given the existing important relationship Airbus has with the Northern Ireland operation.

Bombardier Belfast designed and manufactures the composite wings for the Airbus A220 (formerly the C series aircraft).

Other potential buyers for Bombardier Belfast include significant aircraft component manufacturers like Kansas-based Spirit AeroSystems, the Pennsylvania-headquartered Triumph Group, and an outside contender, the British FTSE-100 engineering company GKN, which has also suffered its own issues in the last 12 months.

Bombardier’s chief executive Alain Bellemare has stressed that the Canadian group is not planning a “fire sale” for Bombardier Belfast, and is determined to get what he has described as the “full value” for its Northern operations.