Franco-Dutch group has reported a 1.9% drop in unit revenue for January-March period 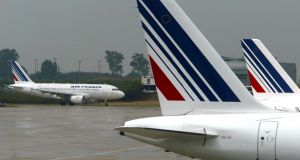 Air France-KLM blamed higher fuel costs and tough price competition as it posted a deeper first-quarter loss on Friday, but said pressure would ease in the rest of the year as rival airlines’ capacity growth slows.

The Franco-Dutch group reported a 1.9 per cent drop in unit revenue for January-March as sales failed to keep pace with its 2.3 per cent expansion in flights offered. The operating loss widened to €303 million from €185 million.

Under new chief executive officer Ben Smith, who joined last September from Air Canada, the company is seeking to boost efficiency in part through better coordination of the Air France and KLM networks and fleets.

“The first quarter has been challenging for the European airline industry, including the Air France-KLM Group,” Mr Smith said in a statement. “Substantial industry capacity growth in the off-peak business period led to unit revenue pressure.”

Air France-KLM said it saw “improving trends” and a “more benign industry supply outlook” –- with a slowdown in Gulf carriers’ growth plans – as it reiterated pledges to keep a lid on debt in 2019 while continuing to cut non-fuel costs.

The fuel bill grew by €140 million to €1.2 billion in the quarter, Air France-KLM said, putting a bigger-than-expected dent in earnings.

The €303 million operating loss exceeded the €251 million expected by analysts based on the median of 14 estimates in a consensus poll by the company.

Non-fuel costs fell 0.4 per cent before currency effects, which pared another €34 million off earnings. But forward long-haul bookings are up for the summer season, the company said, with gains of 1 per cent for May-June.

Transavia, the group’s low-cost operator, saw unit revenue decline 3.5 per cent as a 7.4 per cent passenger traffic rise failed to keep pace with an 11.4 per cent capacity expansion -–partly the result of a later Easter weekend this year. The division’s loss widened to €71 million from €58 million.

Beyond the financial metrics, CEO Smith hailed what he described as “signs of progress in operational performance at Air France” as the carrier improved punctuality and overall customer satisfaction scores – narrowing the gap with KLM.

Mr Smith will give his first detailed strategy presentation to investors at a capital markets day scheduled for November, the company also said on Friday. – Reuters

1 Who are Ireland’s 17 billionaires?
2 Are there annual limits on inheritances or gifts to a child?
3 Fallon & Byrne gets permission for extension in Exchequer Street
4 Fianna Fáil may have just pressed the pause button on the property market
5 UK to prioritise EU trade deal over one with United States
6 My father in a nursing home wants to gift me his house
7 Eason puts Blanchardstown store on market at €16m
8 O’Flynn ‘very unhappy’ with extra payments to former employee, court hears
9 Production of 737 Max could resume ahead of schedule, says Boeing boss
10 Mixed-use investment in Greystones town centre guiding €5.5m
Real news has value SUBSCRIBE