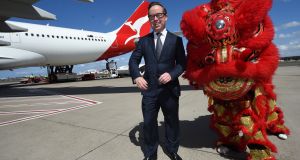 Qantas Airways chief executive Alan Joyce committed to stay on for at least three more years, extending his tenure to the planned start of groundbreaking non-stop flights halfway round the world.

A spokesman for the Australian airline confirmed a report in the Sydney Morning Herald on Wednesday that said Mr Joyce (52) made the pledge at the request of the board and new chairman Richard Goyder.

The commitment means the Dubliner will be chief executive until at least 2022. That’s when Qantas aims to offer direct services from Sydney to London and New York, a complex marathon of a project that Mr Joyce has been promoting constantly for almost two years. He’d previously said he’d be at the controls when Qantas marks its centenary next year.

By 2022, Mr Joyce will have been in charge of Qantas for about 14 years. That’s about three times longer than the typical chief executive in Australia.

He’s already overseen one of the most remarkable turnarounds in Australia’s corporate history. He grounded the airline’s entire fleet in 2011 to tackle a labour dispute, and then proceeded with efforts to reverse losses at the carrier. His three-year recovery plan, started in 2014, went on to produce record profits and a stock-price surge.

“I’ll stay for as long as the board and shareholders want me, and as long as I’m enjoying the job and feel I have more I can give to it,” Mr Joyce said in a statement emailed by the spokesman. “Frankly, all of those things are as true now as they’ve ever been.” – Bloomberg