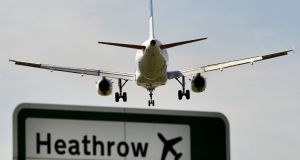 The campaigners against the Heathrow expansion said the UK government’s national policy statement setting out its support for the project failed to properly deal with the impact on air quality, climate change, noise and congestion. Photograph: Oli Scarff/Getty Images

Campaigners trying to block Heathrow expansion have lost a high court challenge against controversial plans for a third runway.

A group of councils, residents, environmental charities and the mayor of London, Sadiq Khan, brought four separate judicial reviews of the government’s decision to approve the plans.

During a two-week hearing in March they argued the plans would effectively create a “new airport” with the capacity of Gatwick, and have “severe” consequences for Londoners. However, their cases were dismissed by two leading judges on Wednesday.

They said in the ruling: “We understand that these claims involve underlying issues upon which the parties – and, indeed, many members of the public – hold strong and sincere views.

“There was a tendency for the substance of the parties’ positions to take more of a centre stage than perhaps it should have done in a hearing that was only concerned with the legality, and not the merits, of the airports national policy statement.”

The case was brought against transport secretary Chris Grayling by local authorities and residents in London affected by the expansion, and charities including Greenpeace, Friends of the Earth and Plan B.

The campaigners claimed the UK government’s national policy statement setting out its support for the project failed to properly deal with the impact on air quality, climate change, noise and congestion.

Support from Labour members of parliament helped push through the proposals to expand Europe’s busiest airport with an overwhelming majority of 296 in a Commons vote in June last year.

Mr Grayling said at the time that the new runway would set a “clear path to our future as a global nation in the post-Brexit world”.

Construction could begin in 2021, with the third runway operational by 2026.

1 Household wealth jumps by 74% since last recession – report
2 Should I switch bank now with Ulster Bank at risk of closing?
3 Will brother’s widow get half of our parents’ estate when they die?
4 ‘Tax war’ will hit Ireland if digital tax talks fail, OECD says
5 Tourism and aviation players demand that von der Leyen end EU travel chaos
6 Tánaiste urges businesses to brace for Brexit with 100 days to go
7 House insurance: save yourself money by reviewing your policy
8 EU said to be leaning towards appealing Apple tax decision
9 New €2m telecoms research initiative described as a ‘game-changer’
10 Finance Ireland refinances mortgages with low level of payment breaks
Real news has value SUBSCRIBE