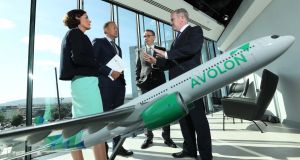 Aircraft lessor Avolon improved its profit in the first quarter by 16 per cent despite a fall in lease revenue.

The world’s third largest aircraft leasing business owned and managed a fleet of 553 aircraft, with total orders and commitments for 398 new aircraft in the first quarter.

During the quarter the company executed a total of eight lease transactions, delivered 12 new aircraft and sold 20 planes including 10 regional aircraft.

“The first quarter represents another strong quarter of performance for Avolon, highlighted by the delivery of $176 million profit for the quarter. The strong financial performance is underpinned by another active quarter for aircraft trading,” said Dómhnal Slattery, Avolon chief executive.

“Since quarter end, we have successfully achieved an investment grade ratings profile – a key corporate objective for 2019 and well ahead of our expected timeframe. Our enhanced credit rating profile will provide us with even greater financial flexibility and access to a deeper pool of capital.”

The group generated $454 million (€405 million) of net cash from operating activities in the quarter and reduced its net debt to 2.1 times equity.