Belfast Flybe base captain asks politicians to save failed airline 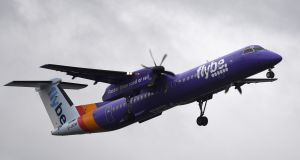 “NI relies heavily on our business to connect it to the rest of the UK,” Capt Chris Robb told a special meeting at Belfast City Hall. Photograph: Andy Rain

The Belfast base captain for Flybe at Belfast City Airport has appealed to politicians to help rescue the failed airline, which he says is “is still salvageable in one shape or form”.

Capt Chris Robb told a special meeting at Belfast City Hall that Flybe, which accounted for about 80 per cent of all scheduled flights from Belfast City Airport, supported more than 1,000 jobs in the North and played a vital role in Northern Ireland.

Flybe senior staff and union leaders told councillors time to save the airline was running out because its air operators certificate would expire in less than 30 days.

“NI relies heavily on our business to connect it to the rest of the UK,” Capt Robb said. “Make no mistake about it that nobody else is in a position, airline wise, to replace the eight flights daily to Manchester and Birmingham, the four flights daily to Leeds and East Midlands and the seven flights daily to London City and the five flights to Southampton.

“We provide businessmen and women with a two-hour door-to-door service into the central business district in London to support the Northern Ireland economy,” he said. “The smaller airlines will not be able to provide the service we do because they do not have the resources in place to operate a 70-aircraft network.

“Belfast has been a very profitable part of Flybe’s business model for years,” he said, adding that Northern Ireland would would suffer “drastically” as a result of not having a regional airline.

“It is fixable. Flybe provides 84 per cent of all flights into Belfast City Airport and I currently have seven aircraft and 170 fully trained staff who are ready to go and ready to provide a service to this country that it needs.”