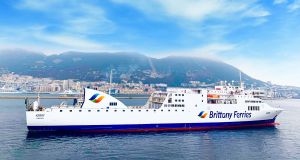 Brittany Ferries has announced it is ending its weekly service from Cork to Santander in Spain.

The company is opening a new service from Rosslare to Bilbao, with the first sailing due to take place on February 28th.

Brittany Ferries chief executive, Christophe Mathieu said: “This was not a decision we took lightly and follows extensive consultation with our freight customers who sought better road connections and reduced driving distances.

“We opened the route in 2018 with a two-year trial window. While passenger numbers have been encouraging, the reality is that freight numbers, which are key to route viability, were not sufficiently robust.”

Mr Mathieu emphasised that Brittany Ferries remains committed to its Cork to Roscoff service, operating since 1978, which carries nearly 100,000 holidaymakers between Ireland and France each year.

Rosslare Europort General Manager, Glenn Carr welcomed the announcement, saying the new service would prove attractive for trade and tourism. Brittany Ferries will benefit from a recent €25 million upgrade of the port.

However the Port of Cork expressed its disappointment at the decision while stressing that it remained committed to facilitating Brittany Ferries in its weekly Cork-Roscoff service, due to recommence in March.

“This surprising decision by Brittany Ferries to cease its Ro-Pax ferry service from Cork to Santander is very disappointing, however we will continue to pursue other options for linking Cork and Northern Spain,” said the port.