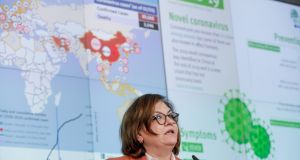 Airlines around the world sank deeper into crisis on Tuesday as the worsening coronavirus epidemic and Italy’s lockdown hammered passenger numbers, forced the cancellation of thousands of flights and led to the delaying of aircraft orders.

The European Commission moved to ease the pressure on airlines on Tuesday by moving to suspend the “use it or lose it” rule whereby airlines must operate at least 80 per cent of their allocated airport slots or lose their right to them.

An airport slot is the right of an aircraft to take off or land at an airport at a certain time of day. Many airlines have been running “ghost flights” in recent weeks in order to maintain access to their slots.

“The Covid-19 outbreak is having a major impact on the international and European aviation industry,” said the European Commission. “The situation is deteriorating on a daily basis. Traffic is expected to decline further in the coming weeks.

“In order to help ease the impact of the outbreak, the European Commission will put forward targeted legislation to temporarily alleviate airlines from their airport slot usage obligations under EU law.

“This measure will help both the European industry and the environment. It releases pressure on the whole aviation industry and in particular on smaller airlines. It also decreases emissions by avoiding so-called ghost flights where airlines fly almost empty aircraft to keep their slots.”

EU commissioner for transport Adina Valean said the temporary measure would allow airlines to adjust their capacity in view of the falling demand caused by the outbreak.

“Without such a measure, airlines would have to continue to operate flights, even if largely empty, to guarantee their current slots at EU airports, with a negative impact – both economic and environmental,” she said.

“Given the urgency, the commission will in due course present a legislative proposal and calls on the European Parliament and the European Council to swiftly adopt this measure in co-decision procedure.”

Some carriers are already facing calamity, with Korean Air Lines warning the virus outbreak could threaten its survival after it scrapped more than 80 per cent of its international capacity, grounding 100 of its 145 passenger aircraft.

The Italian cancellations have added to an already difficult financial situation at Norwegian Air, which has lost 70 per cent of its market value this year and scrapped its 2020 outlook.

It said on Tuesday it would cut about 3,000 flights between mid-March and mid-June and temporarily lay off a “significant share” of its workforce.

Australia’s Qantas Airways said it would also cut its international capacity by nearly 25 per cent over the next six months, and delay an order for Airbus A350 planes due to the plunge in demand.

Qantas said it could no longer provide guidance on the financial impact of coronavirus, which it had estimated on February 20th could hit underlying earnings by up to about $98 million this financial year.

Its chief executive and chairman will take no salary, managers will receive no bonuses and all staff are being encouraged to take paid or unpaid leave.

Leading US airlines American and Delta suspended their 2020 financial guidance and took drastic further measures. Delta said it had seen net bookings fall by as much as 25-30 per cent and expected the situation to deteriorate further.

It is freezing hiring and offering voluntary leave options to staff. “This clearly is not an economic event,” chief executive Ed Bastian told an industry conference. “This is a fear event, probably more akin to what we saw at 9/11.” – Additional reporting: Reuters