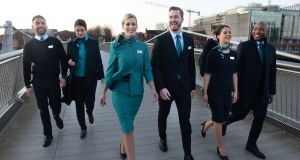 Aer Lingus parent IAG has said that uncertainty over the impact of the coronavirus outbreak means it is unable to give accurate guidance on its future financial performance.

International Airlines Group (IAG), which owns Aer Lingus as well as British Airways, Iberia and Vueling, said on Friday it was experiencing weakening demand on European and Asian flights, in the wake of the spread of Covid-19.

Shares in the group were trading nearly 4 per cent lower at midday, having lost as much as 6.5 per cent earlier in the day. The slump came as IAG said it was reducing capacity on the back of the spread of the coronavirus, which is now present in more than 50 countries.

IAG said its earnings outlook was “adversely affected by weaker demand” as a result of Covid-19.

“We are currently experiencing demand weakness on Asian and European routes and a weakening of business travel across our network resulting from the cancellation of industry events and corporate travel restrictions,” it said.

EasyJet on Friday also announced plans to reduce capacity on some routes due to the coronavirus.

But rival Ryanair has so far said it continued to operate as normal. “There is currently no change to advice for airlines. Our flights are operating as normal and all our terms and conditions apply,” a spokesman for the airline said.

“We will continue to monitor the situation and follow all public health instructions that are issued,” he added.

IAG said some of the freed-up long-haul capacity was being redeployed to routes with stronger demand.

“Capacity on Italian routes for March has been significantly reduced through a combination of cancellations and change of aircraft gauge and further capacity reductions will be activated over the coming days.

“We also expect to make some capacity reductions across our wider short-haul network. Short haul capacity is not being redeployed at this stage.”

IAG said the net impact of current flight cancellations and redeployed capacity was to lower its full year 2020 planned capacity by about 1 per cent in terms of available seat kilometres to 2 per cent for the year.

IAG’s full-year results showed capacity at Aer Lingus increased 4.2 per cent from the addition of a new route connecting Dublin and Minneapolis, as well as increases in capacity to San Francisco, Seattle and Philadelphia.

“Our operating companies will continue to take mitigating actions to better match supply to demand in line with the evolving situation,” it said. “Cost and revenue initiatives are being implemented across the business.”