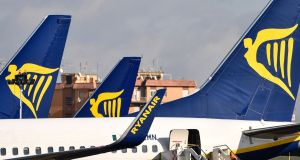 Ryanair is citing government restrictions on travel in response to the spreading coronavirus. Photograph: Getty

Ryanair made further cuts to its flight schedule to and from Italy on Monday, citing government restrictions on travel in response to the spreading coronavirus.

The decision was made ahead of Monday night’s announcement by Italy’s prime minister Guiseppe Conte that restrictions on movement and public gatherings would be extended to the entire country.

From the close of business Tuesday until midnight on April 8th, Ryanair will suspend all Italian domestic flights to and from Bergamo, Milan Malpensa, Parma and Treviso.

Additionally, the airline said it would run a severely reduced schedule of international flights from close of business on Thursday until midnight on April 8th to and from Bergamo, Milan Malpensa, Venice, Parma, Rimini and Treviso. Those flights will now only operate on Fridays, Saturdays, Sundays and Mondays.

“While inbound traffic to northern Italy has suffered large numbers of no-shows over the past week, there are many thousands of non-Italian visitors currently in Lombardy and other affected regions who are scheduled to return home, and Ryanair must continue to run this restricted four-day-week schedule to/from northern Italy to repatriate these non-Italian citizens,” the company said.

The airline, which again apologised to customers for the scheduled disruptions, said it was complying with guidance from the World Health Organisation and national governments.

“All affected passengers have received email notices today of these flight cancellations/changes. If passengers have not received an email, then they can expect their flights to operate as originally scheduled,” Ryanair said.

Meanwhile, European Union regulators, responding to pleas from the airline industry, said they were considering loosening a rule on the use of airport slots to help carriers cope with the impact of the coronavirus outbreak.

Regulations require carriers to use at least 80 per cent of their slots or risk losing them the following year. The International Air Transport Association said last week it was contacting regulators across the globe to seek a suspension of the rules as airlines cut back on flights in response to a drop in demand.

“The commission is currently assessing all available data regarding the significant impact of Covid-19 on the aviation industry,” the European Commission said in an email on Monday from Brussels.

“We are actively assessing all possible options, including revising the slots legislation to address the challenge.”

Aviation is among the hardest-hit industries in a mounting global crisis. In recent days, travel fears escalated after a British Airways baggage handler at Heathrow Airport contracted the disease, while Italy quarantined 17 million people and Lufthansa slashed capacity by 50 per cent and asked for state support. Monday night’s announcement of a country-wide lockdown in Italy will have a serious impact on the sector. – Additional reporting: Bloomberg