Airbnb set to hand over hosts’ names to Revenue

Minister for Housing Eoghan Murphy is said to be readying rules aimed at curbing the loss of properties from the long-term rental market in Dublin. 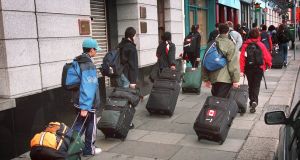 Last year about 23,000 people in the Republic earned a total of €115 million from letting all or part of their homes through Airbnb. Photograph: Dara Mac Donaill

Online short-term lettings platform Airbnb is set to hand over details on thousands of hosts in Ireland who let out property via the website in 2017, as part of an information-sharing agreement with the Revenue Commissioners. The move comes as regulations for greater enforcement of the short-term lettings market are set to be announced next week.

The global platform, which has attracted significant criticism of late for taking properties away from the long-term rental market, and may be the subject of upcoming rules and regulations from the Department of Housing, has until the end of September to pass on details of all the hosts on its site.

Daft.ie has 1,288 properties for rent in the capital but about 20 per cent of these are short-term lets

These details, which were part of an information-sharing agreement with Ireland’s tax authority back in 2015, include the name of the host, how much they earn, the address of the property being let out via Airbnb, the host’s home address, expenses incurred and tracked through the site, such as cleaning fees, and the date of the first booking.

Last year about 23,000 people in the Republic earned a total of €115 million from letting all or part of their homes through Airbnb.

The transfer of data comes as the Department of Housing is preparing new regulations aimed at curbing the growth of the accommodation platform and other short-term operators in Dublin, in particular, amid fears that it’s sucking up supply from the long-term rental market.

While the department previously issued guidelines for the sector back in 2016, growth appears to have continued unabated, and Airbnb is currently advertising more than 7,000 properties/rooms as being available in Dublin.

Daft.ie meanwhile, has 1,288 properties for rent in the capital – but about 20 per cent of these are short-term lets also.

Minister for Housing Eoghan Murphy is set to bring new proposals to Cabinet next week, bringing forward the recommendations of a working group established last year.

The group was made up of representatives from his department, the Department of Finance; of Business, Enterprise and Innovation; and of Transport, Tourism and Sport, along with the Office of the Attorney General, An Bord Pleanála, Fáilte Ireland, the Residential Tenancies Board and Dublin City Council.

As part of its work, the group considered a number of proposals for the Irish short-term rental market, including banning rentals of 90 days or more per year without specific permission, restricting its use to someone letting a room in their own home on a short-term basis as a way of earning an extra income, or their entire home when they go on holiday, through a “one host, one home” policy, as well as a potential licensing system.

An obstacle referred to in their efforts by Mr Murphy last year, was the “lack of quality data” available, in order to “inform an evidence-based approach to the problem”.

While the Revenue Commissioners receives the aforementioned data, a spokesman for Mr Murphy said this was “not reliable” enough for the department’s purposes, as it doesn’t disclose data on a per-night basis.

To achieve this, it’s expected that Mr Murphy will look to introduce some sort of licensing regime, for both Airbnb itself, and the hosts using it.