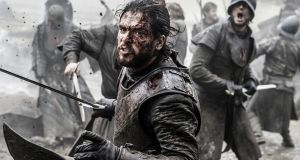 The continuing appeal of Game of Thrones attractions has been one of the “biggest success stories” for the North’s tourist industry, said Tourism NI’s chief executive. Photograph: AP

A spring marketing campaign by Tourism NI to encourage visitors from the South to come North brought in an extra £40 million (€44 million) for the Northern Ireland economy last year, a new report shows.

The “Say Hello to More” marketing campaign encouraged Republic of Ireland residents to take a total of 221,000 overnight trips to the North, according to Tourism NI’s annual review for 2017-2018 published on Friday.

Tourism bosses in the North want to grow revenue from Republic of Ireland visitors to £140 million (€154.7 million) by 2025 and, according to John McGrillen, chief executive of Tourism NI, the latest annual review shows “it has been a really strong year” for the North’s tourism sector.

“In 2017-2018, tourism contributed some £2.5 million per day to the local economy, making tourism a key driver of our economic growth.

“Local tourism businesses are benefiting from growing visitor numbers, with some welcoming record visitor numbers through their doors. The 2017-2018 year also brought an upward trend and significant level of investment by the hotel and wider accommodation industry. In particular, 2017 was a record year for hotel demand in terms of both occupancy levels and sales, with 2 million hotel rooms sold – up 4 per cent on the previous year. The figures for guesthouses, B&Bs and guest accommodation were also very positive,” Mr McGrillen said.

In total there were 4.9 million overnight trips taken in the North from January to December 2017, while overall visitor spend grew to £926 million (€1.02 billion).

Tourism NI’s chief executive said one of the “biggest success stories” for the North’s tourist industry has been the continuing appeal of Game of Thrones attractions.

“Tourism NI estimates that in 2016 more than 120,000 visitors were influenced by Game of Thrones in their decision to visit Northern Ireland, generating around £30 million in the local economy. The Game of Thrones tapestry currently on display at the Ulster Museum until the end of August 2018 has welcomed more than 130,000 visitors since opening in July 2017,” Mr McGrillen added.

The government body is optimistic that early signs for 2018-2019 suggest that it could be another “significant year” for tourism.

1 Hugo MacNeill steps back from Goldman Sachs role
2 North’s consumers will be ‘hardest hit’ if UK fails to secure EU deal
3 Irish economy to grow by 3.4% this year, predicts EY
4 Irish company paid €1.2m a year by collapsed Blumenthal-linked Australian restaurant
5 Will disabled brothers be homeless when Fair Deal loan falls due?
6 ‘Germans are very efficient and reliable. Cancelling is alien to them’
7 Sir Anthony O’Reilly declared bankrupt by court in Bahamas
8 Should AIB compensate me for upsetting letter on arrears?
9 Dating apps move past their shaky start
10 Why bosses should not be afraid of speaking out on Instagram
Real news has value SUBSCRIBE