Kavanagh checks into the Shelbourne at just the right time 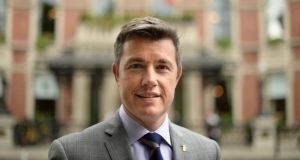 JP Kavanagh strides through the lobby of the Shelbourne Hotel and offers a warm greeting to the grand old dame of the city’s hospitality industry.

On the Friday when we met, the Shelbourne was humming on a swelteringly hot day. “The city is buzzing,” he says as we sit down at a booth in the hotel’s Saddle Room restaurant. “To have this kind of the weather is great. The demand is just crazy at the moment, in a good way. The city is just full much of the time.”

This is reflected in latest industry data, which shows that Dublin hotels had a record-breaking second quarter. According to travel research company STR, the average daily room rate in Dublin’s hotels increased 9.5 per cent year on year to €155.75, outpacing the European average rate of €115.54. The occupancy rate rose by 0.2 per cent in the quarter to 89.6 per cent.

According to Kavanagh, the Shelbourne was running at 100 per cent occupancy on the day we met. “That’s not an exception: we’re 98 per cent for the month,” he adds.

In the year to date, the figure would be a healthy 88 per cent, which is up on 2017 when the hotel had a few rooms out of commission for refurbishment.

“The real positive has been our ability to drive rate,” he explains. “We’ve probably seen a 12 per cent increase in rate this month, and 9 per cent year to date. That’s really positive.”

He’s a little shy about revealing the average rate, saying that it is “over €300” a night.

Owned by Los Angeles-based investment group Kennedy Wilson, the Shelbourne’s strategy is to target the “high-end luxury” segment of the market. Kavanagh works for Marriott, the global chain that runs the Shelbourne day to day.

Turnover rose last year by 5 per cent to €41.7 million, in spite of a number of rooms being out of action for refurbishment. Its profit declined marginally to €3.8 million due to higher operating expenses connected to depreciation on the €15.8 million costs of the upgrades.

The property was recently accepted into the Virtuoso network, which has more than 9,000 travel advisers from more than 350 agencies and 1,700 travel companies. Membership is open to five-star and four-star boutique hotels and the agents are predominantly from the US market.

“They [Virtuoso] have fantastic business coming in from the States,” Kavanagh says.

About a third of the Shelbourne’s business currently comes from the US. “With the increased air connectivity, we’re seeing more and more coming here every year,” he says, contrasting the 32 transatlantic departures from Dublin each day with Edinburgh, where he previously worked for Sheraton.

“They had very few, a lot of that traffic came through London.”

Just five months into the job, Kavanagh admits to having been pleasantly surprised by some aspects of the business, including the restaurant that we’re dining. “This place is busy the whole time,” he says while tucking into his feta cheese starter. “You could do 150 or 160 [covers] on a Saturday night. Eighty per cent from outside, that is not residents. They come to the Shelbourne to celebrate, particularly family occasions.”

He says the Shelbourne probably has a “disproportionate” number of Irish customers.

Career wise, he is following in the footsteps of his father, John Kavanagh, who was also a hotel manager, opening the five-star Fitzwilliam in the 1990s just across St Stephen’s Green from the Shelbourne. “I didn’t have any hope [for another career],” he quips. “I was in [the catering college on] Cathal Brugha Street [off O’Connell Street] when he was in the Royal Dublin hotel across the street so his roster almost worked around mine.”

His brother Conor also spent 20 years in the trade before switching into contract catering.

One of Kavanagh’s early jobs was actually in the Shelbourne. “I did my management placement here in the summer of 1990. So I’ve recollections of what it was like before the 2006 refurbishment, when it was creaking a bit.”

His childhood was diverse. He recalls being sent to Paris as a young boy on an exchange. “Every year I stayed with a family from the age of nine. It was a great thing to do. My French was learned properly. The only challenge I had was that I developed a Parisian accent, so when I was [later] in the south of France I discovered that was an issue.”

His first job after qualifying was with the five-star Savoy group in London, which was “very professional and very organised”, he says.

He did four years there before returning to Ireland to open the Clarence hotel on Dublin’s quays as the Celtic Tiger was roaring. It was owned by U2’s Bono and the Edge, and entrepreneur Harry Crosbie.

“Then I did a brief stint at the Berkeley Court [in Ballsbridge] and while I was there I met Gerry Conlon who owned the Central Hotel [in Dublin’s city centre] and was looking for someone to run it.”

Kavanagh became general manager of the Central Hotel at just 26, the one and only time he worked in a property that wasn’t five-star. “I learned more in those two years than I did in 10 anywhere else. I had great fun doing that.”

From there he moved to the Westin for its opening in Dublin in 2001. He later spent three years at the Turnberry resort in Scotland, following by seven at the Sheraton in Edinburgh, and almost two years with the same chain in Dubai.

He returned to Ireland in 2015 and the following year was appointed as general manager to the Belmond Grand Hibernian luxury train that was launching in Ireland.

What was it like working for Bono and the Edge? “That was an interesting time. Dublin was the hottest little city in Europe. Anyone who was anyone was coming here. Like any owners, they put their personality on it.

“You could see it with some of the things that they did, particularly with the big suite that they did at the top. It was designed for a customer like them, and what they would want from a room when they came back from a concert. The wood-fired stove upstairs was really cosy and wasn’t necessarily what you expected.”

According to Kavanagh, they weren’t hands-on owners but “they did come in for dinner from time to time and they were very personable”.

He describes hotels as “funny places” when you see “the best of people and the worst of people”.

Kavanagh recalls customers at the Connaught in London who had their own cheese that was “kept for years and years and only brought out when they came to stay. But I never had any really crazy requests.”

He doesn’t see his competition as being “next door” but other cities in Europe pitching for tours.

“Our competitors are Lisbon or Copenhagen. Cities of a similar size. A great thing about Dublin is that it’s a compact little city. We need to work together in Dublin to win certain pieces of business.”

His favourite hotel? “Turnberry in Scotland is a personal favourite, I was there for three years. And the Connaught in London. They are two special hotels,” he says, before tackling his plaice main course.

His best check-in experience “ever” was as the budget end of the market, in a Premier Inn, while he was left deflated by his check-in encounter at the famed Waldorf Astoria in New York, not long after getting married.

Hotels are capital-intensive businesses that need constant upgrading and investment to remain relevant. Earlier this year, the Shelbourne reopened the Lord Mayor’s lounge on the ground floor, where it serves afternoon tea, following a major overhaul.

A new bar for residents was opened on the mezzanine level, and an outdoor space that was previously a “dead internal courtyard” has been made into a “rooftop bar without the wind cutting you in two”.

Next year, the hotel plans to upgrade some first-floor meeting rooms, along with installing a kitchen on that level.

“We do a huge amount of private dining up there,” Kavanagh says, adding that about 4 per cent of revenue needs to be deployed each year “just to keep it ticking over”. The hotel has a team of 15 constantly involved in repairs and maintenance. “A hotel never sleeps and it’s a constant process.”

He’s sanguine about the potential impact of the 3,000 new hotel bedrooms that are in the planning pipeline for Dublin.

“The city does need more rooms because we can’t keep up with the demand at the moment. The impact will potentially be a little bit of a cooling on the occupancy levels. The additional supply will have an impact over time but I don’t think it’s going to be a huge challenge for the Shelbourne given that we’re at the luxury end of the market.”

What about the impact of Airbnb? “I stayed in an Airbnb for the first time last October when I went to Paris. My wife looked at it and we tried it, and it worked for us. But it’s a completely different experience to a hotel, there’s no doubt about that. It’s additional supply into the city that will satisfy some of that demand coming through. Will it impact the five-star market? There will be some impact from it, whether it’s directly or indirectly.”

Speculation is mounting that the Government might move in this year’s budget to end the special 9 per cent VAT rate that the hospitality sector has enjoyed since 2011. The initiative helped the sector get back on its feet in the dark days of recession but has probably had its day at a time when many hotels are full and charging high room rates.

“It was a great initiative and helped out an industry that has a lot of employment, and one that’s still growing,” Kavanagh says, diplomatically.

If the rate reverted back to 13.5 per cent, would the Shelbourne be able to pass it on? “In some cases you can but you’d have to take a hit as well. The price is the price,” he says, adding that it has forward bookings out to 2020 and 2021.

Some in the trade might consider that Kavanagh has a handy number. After all, the economy is flying, visitor numbers are at record levels, the property is well invested, and it has a prime location and a storied history. Just open the doors and the business will flow in.

“I wouldn’t disagree with any of that. What I’m tasked with is making sure that our guests have a good experience when they’re here. This place runs well, there’s no doubt about it. We’re all on the crest of a wave in the city. The Shelbourne has an advantage in that it has the history and people have been coming here for years.

“All I see is opportunity and the things that we can do better. This is a wonderful place to come to work every day. There are so many opportunities.”