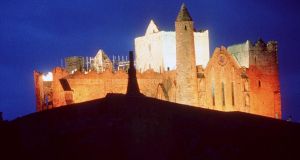 The Rock of Cashel: a potential ‘dark tourism’ site as, according to O’Brien, 600 people were massacred there in 1647

Ireland has numerous “dark tourism” sites which should be promoted by Fáilte Ireland in the same way as the Wild Atlantic Way or Ireland’s Hidden Heartlands, according to an academic who is writing a book on the subject.

Dr Gillian O’Brien said since last May she has visited 44 museum or heritage sites dealing with “misery, suffering, death and the macabre” around the country. She believed Irish adults – and children – were fascinated with such places.

Dr O’Brien has worked as historical adviser on projects at Spike Island in Co Cork and Kilmainham Goal and courthouse in Dublin.

“We are coming down with these place which isn’t surprising probably, given our history of rebellion, emigration and starvation,” she said. When she began her tour of such places she expected to find about 15, but was now confident that her book will include well over 60.

She addressed a special conference at the weekend marking the 200th anniversary of the opening of Sligo Gaol, a potential “dark tourism” attraction, where Michael Collins, Michael Davitt and Charles Stewart Parnell are the most famous former inmates.

Tamlyn McHugh, chairperson of Friends of Sligo Gaol, a voluntary group campaigning for the conservation of the historic building, explained that a feasibility study was being done on how best to safeguard its future.

“We want the public to have access to the building. Not only are many of the cells still intact, but so are the fixtures and fittings including handles used by prisoners to attract the attention of the ‘turn-keys’,” she said.

Graffiti on many cell walls including signatures, crucifixes and apparent countdowns to release dates, provide a tangible link to the past for many visitors, according to McHugh who is hoping that modern technology will help uncover older graffiti which was painted over.

“There is a rumour that Michael Collins wrote his name over the door of his cell so we might eventually find out where he was held,” she said.

To mark the 100th anniversary of his incarceration in Sligo, his grandniece Mary Claire O’Malley unveiled a portrait of Collins by Emma Stroude, artist in residence at the gaol.

Dr O’Brien said that such sites provide a valuable insight into the country’s social history.

“You get an authentic experience in a place like Sligo Gaol because you can stand in a cell where someone was held 150 years ago, perhaps a nine-year-old child who stole an apple,” she said. “That is more real than anything you see in a shiny museum or in a display case which has a gun or handcuffs.

She said that while prisons were obviously associated with incarceration and executions, there were layers of history attached to some sites.

“You might not necessarily think of the Rock of Cashel in terms of dark tourism and regard it merely as an ecclesiastical site, but 600 people were massacred there in 1647. Similarly you might not think of Newgrange that way but when you are there you are inside a tomb. It is a big graveyard but it is not marketed like that.”

The academic, a reader in modern history at Liverpool John Moores University, said that having been accompanied by a number of nine to 15 year-olds on her visits to various sites this summer, she found that rather than being squeamish their responses had been “very robust” .

“They want to know more, which is very heartening at a time when history is being taken off the Junior Cert syllabus,” she added.

The academic accepted there were “shades of darkness” attached to different historic places. “A visit to a concentration camp is about education. They are almost like pilgrimage sites. Nobody is going to buy a T-shirt saying ‘I have been to Dachau’,” she pointed out.

But Dr O’Brien said given Irish people’s fascination with dark tourism there was much potential for tourism bodies.

“I think the Wild Atlantic Way is fantastic but Ireland’s Ancient East? I think Fáilte Ireland could promote a dark tourism tour. There is nothing Irish people like to talk about more than death. There is nothing like a good funeral.”