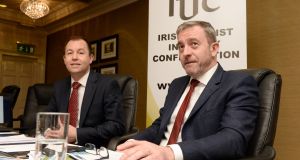 The Irish tourism industry has hit back at Department of Finance officials who recently criticised the sector’s special 9 per cent VAT rate as a “deadweight” with “limited benefits”.

The Irish Tourist Industry Confederation (ITIC), the sector’s umbrella group, last week wrote to Derek Moran, secretary general of the department, to protest about the report, which has dominated discussion about tourism ahead of next month’s budget.

“The 9 per cent VAT review paper by the department is... flawed, unbalanced and inaccurate in its analysis,” wrote the confederation, in a letter signed by its chief executive Eoghan O’Mara Walsh.

“The thrust of the paper is negative towards the retention of the 9 per cent rate... and fails to reflect [its] merits and benefits.”

The industry group also criticised the department officials who authored the report for “remarkably” failing to account for the potential impact of Brexit on Irish tourism.

“[The report also] wholly fails to acknowledge the significantly increased exchequer receipts that the 9 per cent rate has delivered,” wrote Mr O’Mara Walsh.

Subsequent to the release of the department’s critical review of the 9 per cent rate last month, The Irish Times reported that the Government was considering taking the rate away from the accommodation sector.

Mr O’Mara Walsh said any move to restore the rate to its previous level of 13.5 per cent would be a “conscious attempt” by the State to make the industry here less competitive.

The confederation attributes the ongoing boom in inbound tourism to the rate, although the department officials largely attributed it to foreign economic factors.

Industry VAT receipts have risen by more than 50 per cent to €1 billion since the rate was introduced seven years ago.

“It is disappointing that the department’s review of the 9 per cent rate fails to state how beneficial the policy has been for the exchequer,” the tourism body said.

The department’s report last month calculated that the special VAT rate has “cost” the State €2.6 billion in foregone tax since its introduction in 2011, including €490 million last year.

Officials questioned whether the rate was still “relevant” given the ongoing tourism boom. They also queried the rate’s economic usefulness, which they said had declined since the rate’s introduction.

6 Stocktake: Is a market correction looming?