Your smartphone is a mine of precious metals and elements

Devices contain gold, silver, platinum and palladium – and much more

According to an EU directive Ireland has to recycle 65% of all waste electrical items by next year. In Port Laoise AMK Recycling are working to meet those targets. Video: Enda O'Dowd 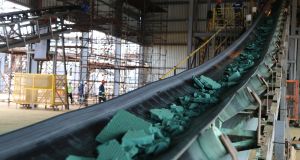 Take a good look at your smartphone. From the display and metal casing to the circuit boards that power the device, your phone is a mine of precious metals.

The average smartphone contains small amounts of gold, silver, platinum and palladium. But mining these metals from ore can be arduous; it takes a tonne of ore to get 1g of gold. Stripping them from existing mobile phones is not easy but can yield a surprising amount of material.

Copper and aluminium, typically lower value than precious metals, can also be found in your smartphone, in the casing or the circuit board.

There is more than just precious metals in your smartphone. Rare earth elements can be found in everything from the glass display to magnets in speakers. Despite the name, rare earth elements aren’t actually that scarce; they can be found in the earth’s crust but are difficult to mine. Such elements can include yttrium and gadolinium in the display; neodymium which is often used in headphones or speakers and microphones; lanthanum to make the tiny lens in the camera that much better; and praseodymium, also for headphones.

Then you have to look at the battery that powers it. Smartphones predominantly have lithium ion batteries, which require lithium. Extracted from salt lakes, much of it comes from the so-called “lithium triangle” that includes Bolivia, Chile and Argentina.

Cobalt is also used in smartphone batteries. Around half the world’s cobalt comes from the Democratic Republic of Congo in central Africa. It’s essential for lithium-ion batteries, but there are ethical considerations. There is a link between cobalt mining and child labour, and the region is plagued by corruption and conflict.

A considerable amount of the cobalt – about one fifth – in the region is extracted by artisanal miners, who work by hand. The work is hazardous and can have health implications, from lung conditions and breathing issues caused by the dust to a link to premature births and birth defects in miners’ families.

Earlier this year, with prices of the metal surging, battery supplier Samsung SDI made moves towards sourcing more cobalt from recycled electronics.