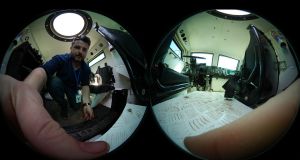 The convoy of military vehicles makes its way slowly down a dusty road in Mogadishu. Scanning the road ahead, I am trying to figure out if that little disturbance in the road’s surface is just from a previous vehicle or it it mean something more sinister like a hidden explosive device. It’s not worth taking the chance, so I point at the offending patch of road and wait while the experts figure it out. It’s all clear, so we continue on.

I have never felt as stressed in my life.

This isn’t real life though – at least not for me. My experience was purely in virtual reality, an experience created by Dublin-based content studio VRAI to simulate the challenges faced by troops in the Mogadishu region every day. It’s a project that was destined for an event in Somalia on International Mine Awareness Day, a United Nations initiative that took place on April 4th.

There are five improvised explosive devices (IEDs) buried on the road, and I am failing miserably at finding them. The VR experience ends with a disorientating explosion after I miss a buried IED. There are suddenly soldiers everywhere as I’m (virtually) lying on my back. To my right, there’s a severed limb. It’s horrifying real.

But that level of realism is the whole point of the experience, creative director Niall Campion said, from the grisly physical effects to the difficulty in spotting the devices in the first place.

“No one ever gets them all,” he said.

The footage of Mogadishu is real, shot on a 360° video camera. The truck you are travelling in is the interactive element added afterwards. “If it’s fully CG it starts to look fake,” Campion said.

Having that sense of realism is crucial for the project to work. VRAI was brought in to help convey the danger posed by IEDs.

More than 1,400 civilians were killed or injured by improvised explosive devices last year in Somalia, figures from the UN Mine Action Service indicate. Last October, more than 500 people were killed and more than 300 were injured in what was described as one of the worst IED bombings on the continent, when a truck bomb exploded in Mogadishu. Soldiers are at risk of death or injury on patrols from IEDs.

The company itself is relatively young, founded just over a year ago. Campion is a filmmaker by trade. He went from making films in college to being an editor, designer and director for films. If you’ve watched RTÉ’s news bulletins lately, you’ve seen some of Campion’s work already – you just don’t know it. He created the skyline backdrop for the programme, which comprises about 500 different bits of video and photography to make up the composite image.

A few years ago he decided to look into 360° video. The technology was still relatively new, so he bought his first 360° camera – a Ricoh Theta – and began to experiment.

“From an editing perspective, I found the language of it interesting,” he said. “How do you tell a story when you can’t really put in cuts? I think 360 is more like theatre.”

Clients began asking if he could create content for them using the 360° camera, so he took on a few jobs. One was to shoot the 1916 anniversary parade, which he did from a position outside the GPO, for a two-minute video comprising time-lapse images of everything passing the landmark building.

It was an interesting experiment and taught him a bit about what works and what doesn’t.

“What ended up being nice about it was the stills I got out of it,” he said. “But watching the whole thing in time lapse makes you feel a bit sick.”

The company has been trading for just over a year, and has done some work with ESB and the Kerry Group, along with some VR experiences for the Defence Forces.

“I got this idea that I would start trying to sell VR as a service I’m offering – long story short, it’s all that I do,” said Campion.

The entire operation is now based out of the Dublin city-centre office. But it has also started working with international projects, shooting 360° video for a charity in Vietnam, before getting the job with the UN.

It was the Defence Forces work that brought VRAI to the UN’s attention, and decided it could work for the situation in Somalia.

It was a short run for such a major project – a matter of weeks before the event – but the firm pulled it off. The footage was shot over a two-week period with the Insta360 Pro, which shoots in 8k, but Campion used the Samsung Gear 360 as a vehicle-mounted camera to get more footage. “If it falls off, or gets shot off, it’s not too expensive to replace,” he said. When filming, the VRAI crew needed an escort and full protective gear, a stark reminder that they were in a volatile zone.

When needed, the company can call in extra resources from the other companies in the building; video company Noho is on the floor below.

VRAI has four full-time staff, and a couple of part-time people who are brought in depending on the job. They share resources with other companies in the building when necessary; in the days before the UN event, Noho was working with the company to make sure it was ready on time.

The small office is filled with VR equipment and props, from the Pico Goblin headsets used for the Vietnam video to the Oculus Rift headsets and controllers, along with numerous computers. Campion pulls a prop out - the dismembered leg that I saw in the aftermath of the IED. It looks less traumatising in real life, something that people caught in the real-world version of an explosion are not spared.

The company travelled to Somalia for the UN event, bringing four Oculus Rift headsets and four computers to showcase their virtual-reality experience.

VRAI director Alan Haverty said the experience was well received at the event. Its lasting effect though will take a bit longer to gauge.

Ultimately, the goal is to cut the number of deaths from IEDs. “I’ve been saying: saving lives through VR,” Campion said.“That is the ultimate aim.”

1 Owner of Dundrum Town Centre to sell prized assets
2 Can a first-time buyer get relief on a buy-to-let home?
3 Oprah wore my dress to the Oscars to pick up a lifetime award
4 Pilita Clark: Working from home is starting to pall
5 Google unveils ‘budget’ Pixel 4a after Covid delay
Real news has value SUBSCRIBE