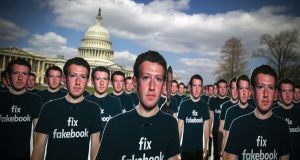 Outside the Capitol in Washington, DC, protest group Avaaz set up 100 cutouts of Facebook chief Mark Zuckerberg with the words “Fix Facebook” on them. Photograph: Al Drago/Bloomberg

Facebook shares made their biggest one-day gain in almost two years as chief executive Mark Zuckerberg appeared before two US senate committees in the wake of the Cambridge Analytica data breach that has sparked calls for new regulation of the social media giant.

Shares in other media tech companies, including Twitter and Alphabet, also rose strongly as the Facebook founder faced a congressional inquisition for the first time.

Facebook traded more than 5 per cent higher at one point shortly after Mr Zuckerberg took his seat at a table before the massed ranks of 44 senators in a rare joint hearing before the committees on justice and commerce.

They pulled back a little to close 4.52 per cent up on a remarkable day.

Inside the senate committee room the Facebook co-founder, chairman and chief executive was fielding the concerns of senators over a range of issues from Facebook’s handling of alleged Russian attempts at election interference to consumer privacy and hate speech.

In one telling exchange, Mr Zuckerberg was asked by Senator Dick Durbin whether he would be comfortable “sharing with us the name of the hotel you stayed in last night?”

After a pause, and some laughter from himself and the room, Mr Zuckerberg said: “No.”

“If you messaged anyone this week, would you share with us the names of the people you have messaged?” Senator Durbin responded.

“Senator, no, I would probably not choose to do that publicly here,” Mr Zuckerberg said.

Mr Zuckerberg said the company was attempting to change in light of recent criticism, as he attempted to forestall any strict legislation aimed at the world’s largest social network.

“We are going through a broad philosophical shift at the company,” he said.

But he said he didn’t agree with Senator Richard Blumenthal that Facebook was “wilfully blind” to abuse.

On the subject of fake news, Mr Zuckerberg said “one of my greatest regrets in running the company” was its slowness at uncovering and acting against disinformation campaigns by Russian trolls during the US election. He said the Russian campaign of disinformation had been discovered “right around the time” of the US presidential election, and said the company had developed “new AI tools” to identify fake accounts responsible.

Outside the Capitol building, which houses Congress, online protest group Avaaz set up 100 life-sized cutouts of Mr Zuckerberg wearing T-shirts with the words “Fix Facebook” on them.

Mr Zuckerberg, who founded Facebook in his Harvard University dorm room in 2004, is fighting to demonstrate to critics that he is the right person to go on leading what has grown into one of the world’s largest companies.

Facebook faces a growing crisis of confidence among users, advertisers, employees and investors after acknowledging that up to 87 million people, mostly in the United States, had their personal information harvested from the site by Cambridge Analytica, a political consultancy that has counted US president Donald Trump’s election campaign among its clients.

Mr Zuckerberg, who has never testified in a congressional hearing, said in written testimony on Monday that he had made mistakes and had held too narrow a view of the social network’s role in society. “Now we have to go through every part of our relationship with people and make sure we’re taking a broad enough view of our responsibility,” he said.

Separately, on Tuesday, Twitter said the Honest Ads Act, which would require broader disclosures in online political advertising, “provides an appropriate framework” for ensuring transparency in digital ads, and the company will work with legislators to “refine and advance” the proposal.

In a tweet on its public policy feed, the social-media company effectively embraced the idea of some form of regulation of internet ads. – Additional reporting, Reuters/PA