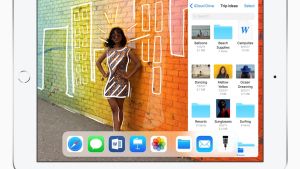 It’s hard to beat this iPad on price. It’s actually cheaper than the iPad Mini, and with the extra power Apple has included as an upgrade, it is worth the money

Take a good look at the sixth-generation iPad. Going on aesthetics alone, you won’t be able to tell the new version from its predecessor. It has the same size screen at 9.7 inches, rather than slimming down the bezels to squeeze in a larger display. It’s the same size and weight, and still has a physical home button rather than opting for the solid touch-enabled panel of the iPhone 7 and 8.

The crucial differences with the new iPad are all under the hood. Extra power, thanks to a new A10 Fusion chip and support for Apple Pencil, the company’s digital pen that has until now been limited to the iPad Pro.

This opens up a new market for the Pencil, with Apple going heavily on the educational benefits. I’m a regular iPad Pro user; I’ve replaced regular notebooks with the tablet, Pencil and a couple of apps. It’s a system that works, as long as I remember to keep everything charged.

Apple has made some calculated sacrifices, although for the most part unless you have a higher spec iPad to compare it with side by side, it’s unlikely you will be able to tell.

It’s mainly around the display. Although the sixth-gen iPad has the same pixel per inch count as the Pro at 264ppi, the key differences are the Pro’s True Tone display, which reacts to ambient light and changes the white balance accordingly, the ProMotion technology that the latest iPad Pro uses to make visuals faster and smoother, and the ide colour display.

You also sacrifice the quad speakers of the iPad Pro, with just regular stereo speakers, and the smart connector that gives you keyboard covers.

There is one other difference between the iPad Pro and the 2018 device, and it’s the screen again. Apple is using a non-laminated screen in the new iPad; the Pro versions use a fully laminated screen that is thinner, eliminates any air gap, and has a non-reflective coating on it.

The most noticeable impact of the non-laminated screen is when you are using the Pencil. There’s little difference in performance, but tap at the screen and there’s a (very) slight difference in sound – it’s a touch louder – and you’ll see a little give or visual disturbance at the point of impact. But aside from that, the Pencil works as well in practically any circumstance. If the Pencil support is why you’re buying the new iPad, its performance is not something to worry about. Add into that the updated compatibility with apps like Pages, and the Pencil could become an important tool for more users.

The lack of an anti-reflective coating means you’ll see your own face a little more often than you’d like, particularly as it gets darker. But these are the tradeoffs of the cheaper price point, and as an iPad Pro user, it’s not a deal breaker for me.

The upgrade to the A10 Fusion chip is a bit of a halfway house. It’s more powerful than last year’s iPad but not at the same level as the Pro. Still, it took everything I threw at it, including some fairly intensive games.

Despite the extra power, Apple says the battery life is the same at about 10 hours, and so far, that claim seems to be borne out by experience of a few days with the tablet.

Who exactly is this iPad aimed at? Aside from the obvious education market, it is aimed at almost anyone who needs – or rather, wants – a tablet. The iPad in its 9.7-inch form is a tried and tested product, and Apple has only improved it with the latest upgrades.

iPad Pro users would find it difficult to go back to this design and miss out on the extras like that little bit extra screen space and the quad speakers. But you’re not going to swap from an iPad Pro to the lower-spec device unless there has been a dire accident that involves a repair bill that is comparable to a replacement.

It’s hard to beat this iPad on price. It’s actually cheaper than the iPad Mini, and with the extra power Apple has included as an upgrade, it is worth the money. The support for Apple Pencil may not be necessity for some, but if you plan on using this tablet for business or education, having the ability to use the stylus with it opens up new possibilities.

The tablet may support Apple Pencil, but you still have to pay extra to get the stylus – and €99 isn’t cheap. The non-laminated screen means it isn’t quite as slick as the iPad Pro, but it’s not something that is massively noticeable.

The 2018 iPad keeps its physical home button, and also hangs on to the headphone jack – two things that Apple has now ditched from its smartphones.

If the iPad Pro is too rich for your budget, the sixth-gen iPad will do nicely.

1 Direct sea routes to Europe offer certainty in choppy Brexit waters
2 Admission of mistake in Oxford vaccine dose raises doubts over reliability
3 Ten of the most mysterious aircraft disappearances
4 ‘I don’t need to do any of this. . .I don’t actually need to work.’
5 Irish designer of Oxford vaccine: ‘I’ve never worked so hard in my life’
Real news has value SUBSCRIBE