Zuckerberg suits up for a stiff delivery before Congress 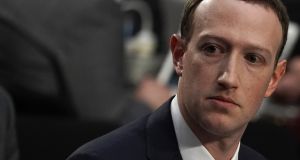 Wearing a suit and Facebook-blue tie rather than his usual jeans, hoodie and trainers, Facebook CEO and chairman Mark Zuckerberg wisely decided to dress like an adult for his grilling before Congress on Tuesday in Washington DC.

That approach had the benefit of making the young billionaire appear more his own age – early 30s – much better than looking like a jejune recent college grad.

But the well-pressed suit seemed to draw forth an equally stiff delivery, like a student awkwardly delivering over-rehearsed lines in the class play.

Zuckerberg had clearly memorised the majority of his opening statement, which stuck nearly word-for-word to the introduction and conclusion of his formal written statement, which he barely glanced at.

But as the heat increased and prepared answers were less easily matched to senatorial queries, Zuckerberg at times was obviously uncomfortable, if more spontaneous.

Senators initially began with rambling questions that verged more on statements and allowed Zuckerberg to be equally discursive, with some senators missing the opportunity to probe further into his replies.

Zuckerberg was also, unsurprisingly, dissembling from the start.

Quizzed by Senate judiciary committee chair Chuck Grassley about how clearly Facebook users understood who could access the information they share, he diverted into a discussion about how Facebook gives everyone the ability to control this by setting the audience for each post.

But of course, the audience setting is not the same as who – other developers, other companies, Facebook itself – accesses such content now and in the past, and how personal content is parsed, analysed and used.

Or, as senator Bill Nelson noted, “You consider my personally identifiable data the company’s data, not my data.”

And it didn’t get any better, especially from Democrats, but Republicans were notably tough, too – a sign that Congress may well, at last, introduce regulatory oversight for such big data-eating companies.

That will worry not just Facebook – even if Zuckerberg said there were some privacy and regulatory approaches he’d welcome – but all of Silicon Valley.

Because all of the tech industry will be on seat’s edge during the hearings Tuesday and Wednesday. This in great part is what this particular hearing is all about – not just taking a bead on Facebook, but firing a shot by Congress across Silicon Valley’s bow.

The Valley knows well Zuckerberg’s performance is going to influence what happens next. And going on some of his replies so far, they won’t be clicking “like”.