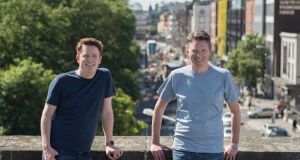 When fintech start-up Plynk announced its €25 million funding round in June last year, it was trumpeted as the largest Series A round raised by an Irish software company.

The company, founded in 2015 by Charles Dowd and Clive Foley, enables smartphone users chat one-on-one or in groups and to send or receive money instantly and without charge from within the chats, with the account linked to users’ Facebook accounts. At the time it announced the sizeable funding round, it claimed to have 6,000 customers.

The curtain was pulled back a little last week when it emerged that the company was in the grip of a funding crisis: it had not paid employees for months

The curtain was pulled back a little last week when it emerged that the company was in the grip of a funding crisis: it had not paid employees for months.

You may wonder how a company that had raised €25 million only a matter of months earlier could suddenly find itself short of money. The €25 million funding, it turned out, was being released in tranches, and only when Plynk hit certain metrics. Plynk missed one of those metrics. The second tranche of funding was not released as a result and the company found itself in financial difficulty.

Dowd says this approach to funding is a common one, although it still raises questions about why there was such a fanfare over the announcement without any hint of the conditions.

The company has been suffering what it described as a “technical glitch” for weeks now, going back to December.

When asked about the cause, Dowd said the company stopped taking on new customers and acknowledged there were financial difficulties. He also admitted the company should have been more upfront with customers.

Prior to last week, there was no indication that the company was suffering from a sustained issue with signing up new customers. In fact, as of Wednesday, its website still claimed you could get a Plynk account in two minutes, and directed potential customers to the App Store and Google Play to set up an account. Both apps were also still available for download.

So where is Plynk now? Dowd says investors are still committed and that interim funding is coming. However, the money is not yet in the bank.

Plynk’s investor, Suisse Privée, is somewhat of an unknown. The private investment trust has only one investment publicly credited to its name – Plynk. According to Dowd, the investors are fully committed “to delivering on the initial investment plan”.

One of the metrics the company was to meet to access the next tranche of funding, Dowd has confirmed, was user numbers; another was new territories.

It’s difficult to see how Plynk could hit those metrics, given that it is not currently signing up customers at all, and Dowd says the company is not focused on growing that user base at the minute. There will be a new set of goals to hit, he says.

The reassuring thing for users is that money in Plynk accounts is safe. That is held by a regulated body Prepaid Financial Services.

'Everyone should feel hard done by,'  Dowd says. “It’s a terrible situation to be in when things don’t go smoothly'

The Mastercards that were generated by the app can still be used until the funds on the card run out – but you can’t check your balance and can’t add money to the accounts.

If you want a refund, Prepaid Financial Services said customers should contact Plynk first, but that it would provide refunds to those who wanted their money back.

The people caught in the middle are the company’s employees. Back in October, Plynk said it would create 40 jobs. A few months later people were leaving for new jobs because bills needed to be paid. Insiders talk of joining an exciting company that turned to turmoil, with staff going unpaid even as new people began work at the firm.

Dowd admits some people may have started working with the company after the funding crisis began and while other staff were not being paid, but said they were recruited before the trouble started. The company had thought the crunch would last only a few weeks, he says, with investors still at the table promising that funds were coming.

He denies people were kept in the dark about the company’s financial situation, but acknowledges there may have been times when what was shared with the leadership team was different from what the wider team was told. He says the company fully intends to pay those who have left and reflected that on their P45s when they left.

It seems unlikely though that the departed staff will be returning to Plynk, although that may have initially been the hope.

“Everyone should feel hard done by,” Dowd says. “It’s a terrible situation to be in when things don’t go smoothly.”

The company is now pinning its hopes on a pivot that Dowd says will still keep them in the money market but will simplify its offering. However, this is being done off the back of depleted workforce. The company currently has no iOS developer on staff, with Dowd saying the firm would have to look externally for the skills.

It’s a sobering tale and a reminder that success doesn’t come easily.