Amazon assistant Alexa not yet a domestic goddess 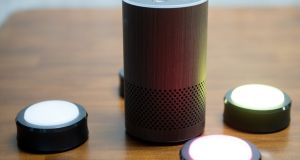 Amazon’s smart assistant Alexa is built into its Echo devices, ranging from the budget-friendly Echo Dot to the smart home hub Echo Plus. Photograph: Daniel Berman/Bloomberg via Getty Images

Let’s lay it on the line: I am a fan of robots and automation. I have a small army of devices in my home to make my life a little easier, from wifi lightbulbs and plugs to a robot vacuum cleaner to take care of my floors. If they made a robot that did all the ironing, even the fiddly bits, I’d be right in there too.

So it’s probably no surprise to hear that I let Alexa into my home. Amazon’s smart assistant is built into its Echo devices, ranging from the budget-friendly Echo Dot to the smart home hub Echo Plus and everything in between. She (because the voice is most definitely female) is an innocuous presence in our home, looking after entertainment, basic home stuff, acting as a kitchen timer and so on. You connect your Echo to the internet and then activate Alexa by calling her name – the wake word – and issuing your command.

So what exactly can Alexa do? Lots. Everything Alexa does is controlled by skills – capabilities that you add as you need them. For example, if you have smart bulbs from Hive or Philips Hue, you can enable their respective skills through the Alexa app for iOS or Android, and then control our lightbulbs by telling Alexa to switch on the bedroom light or turn off the living-room lamp.

But is any of it actually useful? As an experiment, I took a day where I could only do things at home that could be started or influenced in some way by Alexa. To misquote thousands of clickbait headlines, the answer probably won’t surprise you.

Starting the day, Alexa works well as an alarm clock. You can set voice timers, reminders and alarms by talking to Alexa and using ordinary language “Alexa, set an alarm for 8.30am”, “Alexa set a reminder to pay my bills”, and so on. But you can also link together a few different actions in a routine that can be triggered with a single voice command.

I tell Alexa to remind me to bring a few review products with me before I leave the house, and set an alarm for 8.45am that serves as a warning that I need to be ready to go five minutes later.

Downstairs, I ask Alexa for a recipe for pancakes. The Recipedia skill kicks in, offering me a recipe for lemon pancakes, which I reject, followed by potato pancakes, before we finally settle on banana pancakes. They turn out edible, which is an improvement.

Later in the day, we turn to entertainment. “Alexa, how do I entertain my three-year-old?” She’s not exactly forthcoming. “I’m sorry, I don’t know that.” Me neither, it’s why I asked. Alexa also falls down on a few other queries, but eventually I hit on the right one: I ask her what skills she has.

Ask Alexa what entertainment skills she has, and she’ll tell you the top three. It doesn’t reflect well on either Echo users or developers. The top entertainment skills Alexa has on offer are “4 a Fart”, which is apparently the best reason to have an Echo; Meow to Alexa, which makes Alexa meow at you – or your cat; and Jurassic Bark, which makes Alexa bark at you. Truly we are living in a golden age of technology.

I try some games. “Your score is zero.” Alexa manages to sound disgusted with my lack of Harry Potter knowledge when I try to play a game. Okay, I know she isn’t really scathing of my inability to correctly name Hermione’s cat (Crookshanks, by the way) but it feels like she’s judging me.

Ordinarily, Alexa has a very pleasant, neutral voice. It’s not quite robotic, although it can tend to veer that way sometimes. She can sing at you – a tech-themed song – or tell you a bad joke, but if you want to hear Alexa at her deadpan best there are lists on the internet of commands you can give Alexa that will elicit a humorous response – relatively speaking. Tell Alexa “I am your father” and you’ll get back a deadpan “No. That’s not true. That’s impossible.”

Though perhaps the most appropriate question for last week was: “Alexa, do you wanna build a snowman?” Although she had some useful weather advice for me too – an 80 per cent chance of snow (it was bucketing down and there was a snowdrift practically in my hallway) and I could expect 12.7cm of the white stuff, apparently.

Sometimes she’s not as accurate as she should be though, and there are times when I’d swear she’s developing selective deafness.

At bedtime, we run into a few hiccups. The second-generation Echo I’ve installed in the bedroom doesn’t seem to be as sensitive to my voice as the Dot. Putting the baby to bed, I decide to try a new skill – a baby soother app that plays white noise. Except something goes horribly wrong. Alexa tells me she can’t find that, but I can sign up for a trial of Amazon Music Unlimited. Then, as an enticement of sorts, instead of the nice relaxing sounds I expected my 10-month-old to be lulled to sleep with, she plays me a clip of Voices by the band Disturbed instead. Loudly.

Alexa also links in with my Audible account and I’ve set an Echo Dot up in my three-year-old’s room so I can play audio books to her on the nights when I’m juggling both of them solo and it makes life a little easier. It means she “reads” Stickman in an impersonation of Imelda Staunton, and she knows the names of the narrators of each of her books, but it’s a small price to pay for being able to manage a bedtime routine where everyone gets what they need.

I ask Alexa to play me The Rabbit Who Wants to Fall Asleep. She ignores me. I ask again. She starts playing my audio book, but decides to choose her own. Thankfully, it’s a children’s book rather than Duff McKagan’s biography. It’s still the wrong one though, but third time lucky, the rabbit kicks in. Five minutes later, at least one of them is asleep; the youngest is still getting over his introduction to System of a Down.

When he’s finally asleep (with the correct white noise this time), I listen to a bit of David Attenborough’s biography, read by the man himself. Then I tell Alexa I’m off to bed, and she shuts off the TV plug and turns off the lights.

So yes, Alexa can be useful. But there is one thing people need to be aware of. The Echo is always listening. It needs to, because it’s activated by the wake word – Alexa, Computer, Echo – so it can spring into life. Then it sends your command to the cloud for processing before doing as you ask. So essentially, there is something in your home that is always listening to what you say. How that sits with you depends on your approach to privacy, but Amazon says it doesn’t use any of your voice data for advertising purposes.

Regardless, the influence is spreading. Alexa is making an appearance in more devices than just Amazon-branded Echos. Sonos has built Alexa into its Sonos One speaker, Lenovo has its Smart Assistant. Car firms like Ford are rolling it into their systems. Ford announced the new version of its link app, Ford Sync 3, would be compatible with Amazon’s AI, so you can start your car from the house with voice commands, or control smart home devices from your car with a few words. That’s on top of the regular things you’d expect in the car, from navigation to controlling entertainment.

There are smart mirrors and table lights; the technology is also built into the latest version of Windows 10 for PCs. All you have to do is ask Cortana – Microsoft’s smart assistant – to open Alexa.

So the future may be artificial intelligence, whether we’re on board right now or not. But don’t worry: Alexa will tell you, when asked, that she has nothing to do with Skynet. Reassuring, no?