US tech company Sprout Social to create 60 jobs in Dublin 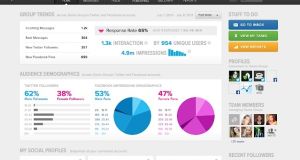 Social media marketing technology company Sprout Social will create 60 jobs in the Republic by the end of 2020 as it looks to expand across Europe and beyond.

The Chicago-headquartered company currently employs 42 people at its Dublin office, which opened last year. Overall, it has more than 500 employees across 25 cities worldwide.

Founded in 2010, Sprout is a social media management and optimisation platform that integrates with the likes of Facebook, Twitter, LinkedIn and Instagram. It is used by more than 25,000 brands and agencies globally, with customers including Gymshark, NBCUniversal, Ogilvy and Ticketmaster.

The company raised $40.5 million last year from backers who included Goldman Sachs, to give it a $800 million valuation.

More than 4,000 companies across Europe, the Middle East and Africa (Emea) are serviced by the Sprout Dublin team, including Intercom and Paddy Power Betfair. Plans are afoot by the company to continue to expand its footprint outside of North America.

Sprout said is already recruiting for staff members in the capital across business development and customer success and advocacy.

“As we look to ramp up the expansion of Sprout Social’s international presence, our Dublin office is going to become increasingly important as the gateway to the wider EMEA region,” said founder and chief executive Justyn Howard.

“With nearly 30 per cent of Sprout’s revenue coming from outside the US, it is crucial for us to focus on supporting and growing our global customers, and Dublin will be the hub for those efforts,” he added.

1 We are ‘sale agreed’, but can we go back with a lower offer?
2 Working from home: New costs, new stresses and little relief
3 Eason to lay off 150 staff as it prepares for June reopening
4 HSBC board rethinks overhaul and seeks even deeper cuts
5 Joint accounts: if one of us dies, can the other access the money?
Real news has value SUBSCRIBE