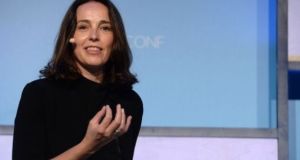 Nextdoor, a San Francisco social network company led by Northern Ireland executive Sarah Friar, has raised $123 million (€109 million) in a new funding round that gives it a $2.1 billion valuation.

She joined Nextdoor at the end of 2018 after spending six years at Square, during which time she helped steer the company as it went public in late 2015.

Founded in 2010, the company is behind a neighbourhood-focused social networking site that allows users to find out about everything from break-ins to available babysitters.

The company has raised more than $400 million in funding from backers that include Comcast Ventures, Kleiner Perkins, Benchmark and Tiger Global Management, which recently led a fundraise for Stripe. The site, which claims more than 195,000 US neighbourhoods, established a presence in the Netherlands, its first overseas market, in late 2016.

It is also active in the UK, Germany, France, Italy, Spain and Australia. The company said it intends to use the new financing to extend its reach in existing markets as well as expanding into Sweden and Denmark.

The company has an Irish-focused website and also established a Dublin-based company in October 2016.

Riverwood Capital led the latest fundraise and its co-founder and managing partner, Chris Varelas, is to join Nextdoor’s board.

“Around the world, there is a universal yearning for the connectedness of proximity,” said Ms Friar. “Neighbours everywhere still love and care about belonging and contributing to a tangible, real place as evidenced by Nextdoor’s continued growth and expansion throughout the US, Europe and Australia.”