US officials travelled to Dublin on Monday to meet Irish officials, Ibec and telcos 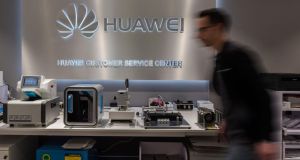 “The onus is not on the US government to show Huawei is not a responsible actor,” a White house official said. Photograph: Geert Vanden Wijngaert/Bloomberg

The White House has urged the government not to use Chinese telecoms equipment provider Huawei in our 5G infrastructure on security grounds.

Representatives from the US government travelled to Dublin on Monday to meet Irish officials, business lobby group Ibec and a number of telcos.

Speaking to The Irish Times, a senior American official reiterated the US government’s opposition to Huawei equipment being used in national telecoms infrastructure.

“We don’t want to see Huawei at all in the mix,” the official said.

He was speaking just weeks after the UK government angered the US by approving the use of 5G technology from Huawei in its 5G network, albeit with the Chinese company being excluded from “core” functions and critical national infrastructure.

“Any country that includes Huawei in its 5G infrastructure jeopardises our ability to share intelligence at the highest level,” the official said. “We believe the risk posed by Huawei, ZTE and any other untrustworthy technology in 5G infrastructure can’t be mitigated.”

In the Republic, both Vodafone and Eir have begun to roll out 5G services, with Three due to launch later this year. Vodafone and Eir both use equipment from Ericsson for its core infrastructure. However, Eir chief executive Carolan Lennon said recently the company was “very happy” using Huawei equipment elsewhere in its network.

Pushed on whether having a large number of US multinationals and critical infrastructure such as data centres located in the Republic, meant there was additional security risks using Huawei equipment, the official said: “I know it is in the interests of the Irish Government to make sure that economic growth continues and I can only think that having a highly secure underlying telecommunications infrastructure is in the best interests of the country.”

“Companies want to have assurances that the pipes over which their intellectual propertyand data goes are secure and won’t be siphoned off,” he added.

New guidelines from the European Commission published earlier this month give individual member states the right to restrict China’s Huawei and other telecoms equipment providers from core part of their networks. The Irish Government, like other European countries, has acknowledged concerns about Huawei without ruling either for or against its exclusion from 5G networks.

The company has consistently denied allegations that its equipment could be used by the Chinese government for spying purposes.

The official said the US had considered taking controlling stakes in rivals Nokia and Ericsson to thwart the ambitions of Huawei, and he also mentioned possible R&D partnerships as well. However, he downplayed the likelihood of this happening any time soon.

According to the official, questions about whether Huawei is just a pawn in the trade war between the US and China are no longer being asked by allies.

“It is obviously not a trade issue. This is an issue of national security with strong economic components to it,” he said.

“The onus is not on the US government to show Huawei is not a responsible actor. The onus is on them to show they are and they have been unable to do so,” the official added.

The Chinese company for its part, criticised the White House official’s comments.

“Huawei opposes the politicisation of 5G technology. We believe that managing cyber security should be based on facts and standardisation, not on speculation and prejudice,” it said in a statement.

The company in September announced plans to provide $300 million (€270 million) a year in funding for universities globally as it looks to build stronger R&D relationships. It recently provided €6 million to Irish software research centre Lero.

The White House official said that “anybody who engages with Huawei needs to do so with very open eyes”.

“They need to take a look at Huawei’s long track-record of intellectual property theft and the fact that they have only become a dominant market player by building on that,” he said.