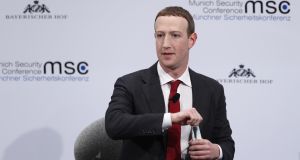 In an opinion piece published in the Financial Times on Monday, Mr Zuckerberg said regulation is necessary, even at the risk of it impacting on his company’s profits.

“I believe good regulation may hurt Facebook’s business in the near term but it will be better for everyone, including us, over the long term,” he wrote.

Mr Zuckerberg is meeting senior officials in Brussels this week to discuss new rules and regulations for the internet. His company on Monday published a new white paper calling for stronger regulation in the areas of elections, harmful content, privacy and data portability.

“I don’t think private companies should make so many decisions alone when they touch on fundamental democratic values,” the Facebook founder writes, adding: “We have to balance promoting innovation and research against protecting people’s privacy and security.”

Mr Zuckerberg warned that regulation can have “unintended consequences”, particularly for smaller businesses that don’t have the resources that larger corporates have. However, he suggested that allowing individual companies to set their own standards wasn’t enough.

“To be clear, this isn’t about passing off responsibility. Facebook is not waiting for regulation; we’re continuing to make progress on these issues ourselves. But I believe clearer rules would be better for everyone.” he wrote.

“The internet is a powerful force for social and economic empowerment. Regulation that protects people and supports innovation can ensure it stays that way,” he added.

Facebook and other social media giants have come under increasing pressure to do something about their platforms being used to spread false and misleading information.

Speaking at the Munich Security Conference in Germany on Saturday, Mr Zuckerberg called for online content to be regulated with a system somewhere between the existing rules used for the telecoms and media industries.

“Right now there are two frameworks that I think people have for existing industries – there’s like newspapers and existing media, and then there’s the telco-type model, which is ‘the data just flows through you’, but you’re not going to hold a telco responsible if someone says something harmful on a phone line.”

“I actually think where we should be is somewhere in between,” he said. – Additional reporting, Reuters

Business owner waiting over a month for overdraft approval 05:33
After getting ahead in Covid testing, Berlin now hopes to get ahead in recovery 05:30
Deliveroo branches into grocery deliveries in Ireland 05:29
Covid-19 could push half a billion people into poverty, Oxfam warns 05:20
Disruptive and affordable: new game breaks into hyper reality 05:00

1 Coronavirus: The online scams, apps and trends you need to know about during the pandemic
2 Lockdown exit: How can Irish economy reopen without big health risks?
3 EU ministers fail to agree virus economic rescue in all-night talks
4 Property market has not felt full impact of Covid-19, warns Sherry FitzGerald
5 Covid-19 could push half a billion people into poverty, Oxfam warns
Real news has value SUBSCRIBE