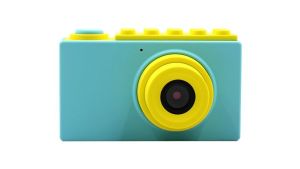 Does anyone really buy a camera these days? Smartphones have largely taken over from the standalone point-and-shoot, and although digital SLRs and more high-powered cameras are hanging in there, there are fewer cameras on display than there used to be.

What do you do, though, when your child wants a camera? Giving them a smartphone, depending on their age, is problematic – and expensive if it all goes wrong. Still, they’re learning at an early age what a selfie is and the obsession with cameras isn’t necessarily a new phenomenon, so you’re fighting against a strong tide on this one.

There are options, though. Like the myFirst Camera 2 by Oaxis. Built for children, it is chunky without being huge, and colourful without requiring sunglasses to shield you from its worst effects. It hits the right notes with kids: my not-quite-three year old took one look at it, declared it to be his and refused to let it go. He even slept with it clutched in his fist.

In the box you get a waterproof housing and a wrist strap for the camera to limit any accidents – and, given the age group, that’s a very good thing.

There is no on-board storage, but Oaxis has included a 16GB card in the box, and it supports up to 32GB. That’s a lot of photos and video, even at full resolution with the 8-megapixel sensor, or HD in the case of video.

As far as cameras go, it looks a bit like a Lego brick. A pastel-coloured Lego brick. It even has the Lego strip on top, though I’m not sure what this is for other than decoration. The size makes it easy to grip – an essential feature – and compact enough for small hands to keep a hold of.

Qualitywise, the camera does okay. There is no flash built in, so you have to choose your lighting carefully. You aren’t going to get photos that will rival a high-powered compact camera that costs four times as much. But you can’t look at this camera with adult eyes; it will never stack up. It takes good photos, but not spectacular ones; the video is good as long as you don’t push it too much. But, as far as kid-focused cameras go, MyFirst Camera 2 stacks up well.

It has some creative elements, too. You can choose a frame, for example, with a few different options, from nice decorative frames to adding in some cartoon characters. You can also add moustaches, hats, glasses and so on. It adds a new dimension to photos and keeps kids’ interest.

Battery wise, you should get several hours of shooting. It’s a 1000mAh battery, which should give you a full day.

That waterproof case is good for up to 3 metres, and will also protect against shocks, so, with that in mind, the camera went straight into the case. It may be built for kids, but there is no point in taking unnecessary risks. It was tested about 30 seconds later when the camera was accidentally fired across the room when an overenthusiastic hand gesture went wrong. The case didn’t crack, the camera was intact; there wasn’t even a scuff on it.

The box also includes stickers that you can use to decorate the camera in whatever way your child sees fit. Top tip: don’t leave them unattended with the stickers. They are tiny but tenacious; predictably, I’m finding them stuck to everything in our house, from the wooden floors to the walls.

The good
Easy to handle, simple controls; the myFirst Camera is built for children and it shows. It is sturdy, which is crucial, and is very easy to start shooting with. Even a two-year-old can pick it up, even if his framing wasn’t quite up to scratch. Speaking of frames, adding the frames and creative elements to the photos makes this more appealing to children too.

The not-so-good
Be prepared for lots of slightly out-of-focus photos. Low light or fast-moving subjects don’t fare well here, but then Oaxis aren’t really pitching at this market. As a starter camera, though, the MyFirst Camera 2 does well.

The rest
The camera accepts memory cards up to 32GB in size, and there is a 16GB card in the box. That makes it relatively cheap if you need a replacement, because you aren’t looking for fast write speeds or huge capacity.

The verdict
A good alternative for kids, especially if you want to keep your smartphone intact.

1 Knock gets visit from world’s largest passenger plane
2 A maverick taking on the Irish whiskey establishment
3 Will Avolon find itself on the block as China prepares to seize troubled parent HNA?
4 Why Sweden ditched its negative rate experiment
5 Review: prepare to flip over Samsung’s new folding phone
Real news has value SUBSCRIBE