Facebook may have to pay more tax, Zuckerberg accepts

Global cross-border taxation rules are set to be rewritten 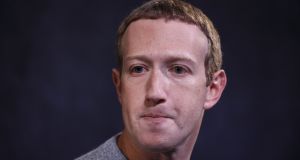 Facebook chief executive Mark Zuckerberg for the first time said he supports efforts to create a global digital tax, something Minister for Finance Paschal Donohoe has previously said could cost the exchequer €2 billion a year.

The tech giant’s chief executive will tell world leaders gathered at the Munich Security Conference on Saturday that he welcomes the efforts of the Organisation for Economic Co-operation and Development (OECD) to find a global compromise on how to tax profits from digital activities.

“We want the OECD process to succeed so that we have a stable and reliable system going forward,” Mr Zuckerberg will say, according to a copy of his prepared remarks. “And we accept that may mean we have to pay more tax and pay it in different places under a new framework.”

One of the State’s leading tax advisers suggested on Friday that the Department of Finance estimate was a “moveable feast” because it depended how the rules would ultimately be formulated.

“There will be a loss on the basis that if you’re a big tech company in Ireland operating overseas then you’re taxed in Ireland,” said Peter Vale, tax partner at Grant Thornton.

“If that changes ... it will dilute the benefit of our rate and a portion of [profit] won’t be subject to tax in Ireland,” he said.

The talks at the OECD are key to maintaining a tariff truce between Europe and the US. The French government says that if there is no agreement by the end of the year, it will resume collecting a national digital tax – a levy the US says discriminates against American companies.

Mr Vale said that the “earlier consensus is reached the better, because if there isn’t consensus then countries will do their own thing”.

But the loss to the State could be limited, he said, given that large companies, particularly in the technology sector, had shifted their intellectual property to Ireland, something that could boost Irish corporation tax receipts in the next seven years or so, all else being equal.

Mr Zuckerberg will meet several European leaders over the weekend as he visits Brussels and the conference in Munich, which will also be attended by French president Emmanuel Macron.

In an effort to advance the global talks on digital tax, the OECD said on Thursday that new rules – including a minimum tax – could boost government revenues by as much as $100 billion.

That, however, is not supported by the Department of Finance under the existing Government.

“Ireland is committed to examining what actions are needed to address aggressive tax planning but we do not support proposals which seek to eliminate fair tax competition,” a spokesman said.

“Nevertheless, Ireland continues to engage positively in the discussions at OECD, and remains open to solutions which respect our right to compete fairly and which respect the legitimacy of Ireland’s long-standing 12.5 per cent corporate tax rate,” he added. – Additional reporting: Bloomberg