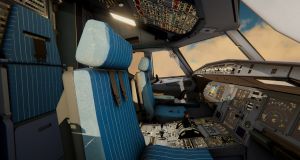 Planemaker Airbus is to launch a new comprehensive virtual reality (VR) pilot training solution that is the brainchild of Irish man Shane Carroll and which has been largely developed in Dublin.

With the company forecasting a need for 550,000 new pilots globally over the next 20 years, it is hoped that its VR Flight Trainer will go some way to meeting the increased demand for training.

The new solution, which puts pilots in the cockpit of an Airbus A320, was due to be unveiled at the Singapore Airshow earlier this week. This plan was abandoned, however, at the last moment as Airbus joined other aviation companies in downsizing its delegation amid coronavirus concerns.

The VR flight training solution has been designed by Mr Carroll, an A320-family pilot and instructor, along with his Dublin-based team of software developers, who have mainly come from the consumer entertainment industry.

“We estimate there will be 37,400 aircraft joining the global fleet. That roughly means a doubling of the existing fleet and of the training demand so there is a clear need to address this. In addition, there is a new generation of pilots coming through that won’t accept a textbook or chalk and a blackboard as a source of their training,” said Mr Carroll, head of VR projects at Airbus.

Mr Carroll, who started his career at Aer Lingus, has more than 20 years’ experience as a pilot and over 10,000 hours’ experience flying in Europe and Asia. He got the idea for the VR solution after realising how difficult it was for trainees to get near a professional grade flight simulator.

“VR essentially offers opportunities to address the training need in that we can get pilots inside a cockpit earlier and more often as it is more accessible than a full-size simulator. They are obviously amazing but cost anywhere between €6 million and €25 million depending on the model and because they are so expensive, are booked up weeks and months in advance,” he said.

Mr Carroll established his own company called VRnam to develop the VR solution in 2016 while based in Ho Chi Minh city. The start-up later won a place on Airbus’ Toulouse-based accelerator and was subsequently acquired by the planemaker for an undisclosed sum.

Mr Carroll said it was easy to convince his new employer of the value in relocating the team in Dublin to avail of the best talent locally.

The software will run on consumer, off-the-shelf equipment, including the VR; no proprietary hardware is needed. The package required for trainees are a personal computer, a VR headset, and a pair of hand controllers.

Using the software, pilots are immersed in a simulated virtual cockpit where they can practise procedures together until perfected. Trainees can practise alone, or as a crew; sharing the same physical room, or working remotely together online. Similarly, they could train with or without a human instructor guiding their lesson.

The VR Flight Trainer is to be used in Airbus training centres from the second half of 2020. It will subsequently be available as a customisable solution for individual airlines after this.

“By the end of the first quarter we are going to start testing with customers and are canvassing major airlines right now about this,” said Mr Carroll.

While the software is currently for flight training purposes he said it could be used in other scenarios, such as cabin training and maintenance.

1 Coronavirus: Irish holding back on holiday plans
2 Bank leaked my loan request to family who tried to rip me off
3 Eason acquires rival Dubray Books for undisclosed sum
4 When the Chemistry no longer works – the closing of a leading Irish ad agency
5 Solar panels: Are they worth the investment?
Real news has value SUBSCRIBE