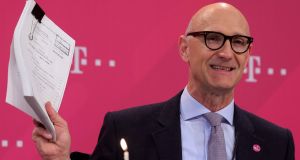 Deutche Telekom chief executive Timotheus Hoettges: ‘We have the chance to become number one in the United States, to overtake AT&T and Verizon.’ Photograph: Friedemann Vogel/EPA

The merger between T-Mobile US and Sprint is within reach, the head of T-Mobile’s main owner Deutsche Telekom said on Wednesday, vowing to go on the offensive to close a valuation gap with US market leaders AT&T and Verizon.

Highlighting the positive market reaction after a New York judge last week dismissed a lawsuit brought by more than a dozen US states trying to block the deal, Tim Hoettges said the “new” T-Mobile would have a market value of about $120 billion (€111 billion).

That compares with $274 billion for AT&T and $242 billion for Verizon, he added, in remarks prepared for a news conference.

“That is a difference of around $120 billion. I see no reason why this cannot be reduced considerably,” said Mr Hoettges, talking up what he called “the biggest merger with a German company the US has ever seen”.

Mr Hoettges (57) has battled for seven years to get the US deal over the line. Once completed, the German group would own 42 per cent of the new T-Mobile but have a voting stake of 67 per cent and control of the board.

The three main US wireless carriers would have similar customer numbers of between 140 million and 150 million, Mr Hoettges added: “That puts us on an equal footing and in a position to ramp up attacks on the competition.”

“We have the chance to become number one in the United States, to overtake AT&T and Verizon. That, at least, is our ambition,” he told a news conference.

Deutsche Telekom earlier forecast growth in its core earnings would slow to 3 per cent this year after a strong fourth quarter, as it looks finally to complete a merger that would create the third-largest US wireless carrier.

That is below analysts’ consensus forecast and marks a halving from the growth rate in 2019, when Deutsche Telekom’s US, European and German businesses all did well – helped by favourable foreign exchange rates.

With Sprint struggling during the protracted period during which the deal was pending, T-Mobile chief executive John Legere has signalled he would seek to renegotiate some of its terms to reflect the changing market dynamics.

Uncertainty over the deal has weighed on the group balance sheet, as have the heavy costs of building next-generation 5G networks, forcing Deutsche Telekom in November to say it would cut its 2019 dividend.

Deutsche Telekom reduced its net debt by 2.8 billion in the fourth quarter to €76 billion, bringing its leverage ratio back down to 2.65 times adjusted EBITDA, within management’s comfort zone.

Fourth-quarter revenues rose by 5.4 per cent to €21.361 billion, ahead of analyst expectations, while adjusted EBITDA AL was up 8.2 per cent to €6.030 billion, also just ahead of consensus. – Reuters