Company warns that worldwide iPhone supply will be temporarily constrained 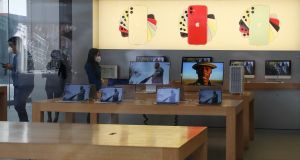 Global stocks fell as a sales warning from Apple rippled across markets in the latest sign of the mounting corporate and financial cost of the coronavirus outbreak.

Europe’s major bourses all fell in late-morning trading on Tuesday, sending the composite Stoxx Europe 600 down 0.5 per cent. Futures pointed to similar losses for the S&P 500 on Wall Street, while the tech-weighted Nasdaq was set to fall around 1 per cent.

Investors have struggled to quantify the impact of the coronavirus on China’s economy, and the likely knock-on effect to supply chains around the world. So far, markets have stayed buoyant on hopes there will be limited spillover internationally and that central banks stand ready to intervene if needed.

Investors shifted into US sovereign debt, considered a shelter during economic uncertainty, sending the 10-year Treasury yield down 4 basis points to 1.546 per cent. The 30-year yield fell 5 bps to 1.992 per cent, slipping below 2 per cent for the first time in two weeks.

China’s currency was also under pressure. The onshore renminbi dropped 0.3 per cent, weakening to Rmb7 against the US dollar. The offshore variant, which trades outside mainland China, slipped by a similar margin. Japan’s yen, which attracts inflows during times of uncertainty, climbed against the US currency, while Brent crude oil fell 1.8 per cent to $56.60 per barrel.

California-based Apple on Monday warned that “worldwide iPhone supply will be temporarily constrained” due to the coronavirus epidemic and that factories run by its suppliers in China were resuming work more slowly than expected.

Shares in Apple suppliers dropped on Tuesday. Dutch-listed ASM International and Frankfurt-listed Dialog Semiconductor were among the worst performing major companies in Europe, each falling more than 4 per cent.

“This unexpected news confirms the worst fears of [Wall Street] that the virus outbreak has dramatically impacted iPhone supply from China/Foxconn with a demand ripple impact worldwide,” said Daniel Ives, an analyst at Wedbush Securities.

“While we have discussed a negative iPhone impact from the coronavirus over the past few weeks, the magnitude of this impact to miss its revenue guidance midway through February is clearly worse than feared.”

Beijing has imposed restrictions on the movement of people and rules on when certain types of companies can restart operations, in a bid to contain the spread of the virus. The coronavirus has killed 1,868 people and infected 72,436 in China as of Monday, according to the country’s National Health Commission.

Economists expect China’s economic growth to slow sharply in the first quarter, which could ricochet across other regional economies. South Korea’s President Moon on Tuesday called for “all possible measures” to support the country’s economy. Meanwhile, concerns are rising that Japan may fall into recession.

“There is uncertainty, not just about the epidemiological progress of the virus, but effects on the global economy,” Citigroup analysts said on Tuesday. – Copyright The Financial Times Limited 2020